Impoverished communities in mining areas have always not adequately benefitted from mining projects taking place in their respective areas though they have silently played victim to effects of bad mining practices owing to failure by private mining firms to adhere to environmental management plans coupled with poor monitoring of mining activities by government structures.

But this is gradually becoming an occurrence of the past thanks to Tonse Tipindule Project which Norwegian Church Aid (NCA) has been implementing in partnership with other faith based organizations namely Catholic Commission for Justice and Peace (CCJP) of the Episcopal Conference of Malawi (ECM), Church and Society Department of the CCAP Livingstonia Synod, Evangelical Association of Malawi (EAM) and Qadria Muslim Association of Malawi (QMAM) with funding from Tilitonse Fund.

Economic Justice Coordinator for NCA, Thokozani Mapemba, says results of the project have so far indicated that hostility between mining investors and the community in the districts targeted by the project has been reduced as the project has successfully empowered communities to engage with the government and investors.

The project has gone a long way in contributing towards a transparent, accountable and responsive mining regime that benefits not only mining companies but also the public including communities from which mining is taking place, through improved citizen participation and positive engagement between Civil Society Organizations (CSOs), mining investors and government,

Tonse Tipindule Project has been implemented in nine selected mining districts with the faith based organizations responsible for different interventions at district and community level which include Church and Society responsible for Chitipa, Mzimba and Karonga, QMAM for Balaka and Mangochi and EAM for Mwanza, Phalombe, and Mulanje.

Unlike the rest of the partners, CCJP has four main roles and responsibilities which are leading all technical programmatic aspects in conjunction with NCA, coordinating national level advocacy activities, providing technical support to all project partners in all districts and supporting research components.

NCA is also responsible for leading implementation of quality assurance, monitoring and evaluation, procurement and general administration aspects of the project.

On national level, the project has registered successes. For instance, through CCJP we have advocated for legal   reforms to ensure that we have a mining regime that benefits local communities,

He cites an interface meeting between Members of Parliament and representatives of communities from mining areas which CCJP jointly organized with the Centre for Environmental Policy and Advocacy (CEPA) to lobby for the passing of the Revised Mines and Minerals Bill as one of the necessary interventions brought about by the Tonse Tipindule Project.

The meeting brought together 15 community members from Phalombe, Mzimba and Karonga and 25 members of the parliamentary committee on Natural Resources and Climate Change.

The meeting successfully provided a platform for communities and parliamentarians to engage on issues surrounding the Mines and Minerals Bill and other issues that are affecting the communities.

During the meeting, communities demanded the passing of the Mines and Minerals Bill, which shows that the communities are empowered and they are no longer dependent on CSOs to speak on their behalf and all they require are the platform and spaces for expressing their concerns and demands.

The MPs committed to veto the bill in order to ensure that it addresses all the community concerns and the pass it into law.

To advocate for the passing of the Mines and Minerals Bill, NCA together with a local civil organization Citizen For Justice also conducted a live debate on ZODIAK Radio in which community members, CSO members from Malawi Women in Mining, Natural resources justice network, NCA, CCJP and the chair for the parliamentary committee on Natural Resources and Climate Change were part of the panel.

Over 800 SMS were sent from all over the country to the program.

The debate achieved holistic engagement with the    general public even from outside the project catchment areas. Malawians demonstrated their concerns on delays in passing the Mines and Minerals Bill,

Besides the national level achievements, he says the project has ensured that there is comprehensive stakeholder engagement at community and district level which has been achieved through capacity building of community action groups (CAGs) and community leaders to engage with investors, and district officials.

He explains that through the project, members of local CAGs have been trained on how to engage investors and government.

The project documents emerging issues from the catchment areas and plans with the community on how best to engage duty bearers. Through this arrangement, the communities have registered success in a number of areas in negotiating with investors for a number issues including fair resettlement compensation, corporate social responsibility benefits and inclusiveness in decision making on mining projects,

Among other interventions to promote stakeholder engagement, Tonse Tipindule Project has sponsored Mining Indabas at both national and district level that have attracted stakeholders from government, civil society and communities from mining areas. 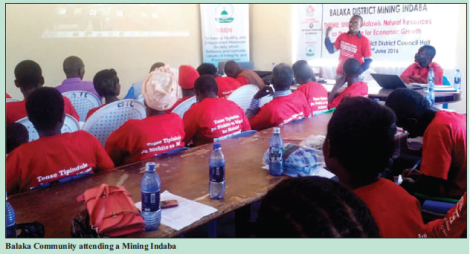 In implementing the project, NCA says it stresses the importance of engaging more relevant stakeholders such as traditional leaders, councillors and more importantly faith-based leaders in advocacy issues with the aim of widening reach-out on minerals industry governance issues.

NCA Country Director Stein Villumstad, who proposes a dialogue-oriented other than militant approach with stakeholders including investors and government, says there is need to utilise the wider-reach that faith-based organisations (FBOs) and local government structures have in society to advance pertinent issues in mining governance and sensitise the populace about mining issues.

The reach of faith-based leaders cuts across these stakeholders. People with authority belong to one faith or the other, which gives faith leaders a huge, ideal and strategic podium to reach across the spectrum,

Secretary General (SG) for Episcopal Conference of Malawi (ECM) Father Henry Saindi shares Vullumstad’s stand saying it is a calling for every faith based organisation to contribute something good to the nation.

He explains that faith leaders remain a beacon of light that provides guidance towards achieving anything good for the nation and incorporating them in the project that will ensure that proceeds from natural resources trickle down to the marginalized masses is an appropriate idea.

This is a good course that will bring development and make people happy, which is quite commendable as the light of God will illuminate the path we are taking on this journey and guide us to success,

Secretary General for QMAM, Osman Karim comments that there is need for Malawians including political leaders to support the Tonse Tipindule Project by upholding the spirit of responsibility and good citizenship to ensure a   better and well developed Malawi is realised through sound and fair utilisation of natural resources.

He says pursuance of personal interest and greed is what has brought about the negativity that the mining sector is viewed with hence there is a need to work together and bring positive light to the sector.

It is immoral that only one person or a selected few should benefit from these resources that belong to the entire nation. Each one of us needs to take responsibility and work towards making mining a vibrant sector, with which, we can economically transform our country,

The theme for phase 2 of Tonse Tipindule, which took up the recommendations from Phase 1, is Promoting Increased Inclusion, Accountability, and Responsiveness in Malawi’s Mining Sector.