…There is now comprehensive stakeholder engagement at community level

The Catholic Commission for Justice and Peace (CCJP) says it has registered tremendous progress in its mining governance project dubbed Tonse Tipindule, which it rolled out in 2013 to help ensure that the minerals sector benefit more Malawians including impoverished communities in areas where mining activities are taking place.

CCJP, the Social Justice and advocacy  arm of the Catholic Church in Malawi, in a joint effort with other faith organisations such as Qudria Muslim Association of Malawi (QMAM), Evangelical Association of Malawi (EAM) and Church and Society of Livingstonia Synod, embarked on the Tonse Tipindule Project with support from Tilitonse Fund through Norwegian Church Aid (NCA) to tackle interrelated challenges which were identified    through a Malawi Mining Sector  Political Economy Analysis conducted by Tilitonse Fund.

Project Officer for CCJP responsible for Extractives, Success Sikwese, told Mining & Trade Review that the study identified gaps and inconsistencies in the legal, institutional and policy framework, fragmented and uncoordinated civil society actions and very limited or no community involvement in decisions related to mining activities in their areas as some of the challenges the sector was facing.

The other challenge was lack of comprehensive data and information on the state of mining in the country.

It was noted that these four core interrelated challenges may have ultimately resulted in lack of transparency, accountability and responsiveness in the sector, undermining potential benefits that can be derived by the country and citizenry.

So as Catholic Church, we were looped in, together with other equally important faith organisations, to help in implementing various interventions that were aimed at addressing these issues. I am delighted to report that the project has succeeded in addressing a number of these challenges as, among other things, there is now comprehensive stakeholder engagement at community level. However, there is need for continuity to, among other things, empower more communities where exploration and mining activities are taking place,

CCJP’s interventions in the sector so far were aimed at initiating reforms in the policy, institutional and legal framework, establishing a comprehensive stakeholder engagement framework at community level and mobilising and supporting CSOs to effectively support affected communities and engage mining companies and government.

It also assisted in establishing a solid knowledge base on mining issues in Malawi through operational and strategic research on mining in Malawi, which included comprehensive mapping of extractive companies.

We also developed advocacy materials and messages, engaged Parliamentary Committee on Natural Resources and Climate Change (PCoNRCC), Ministry of Natural Resources, Energy and Mining, the Department of Environmental Affairs  and other relevant government Ministries and Departments over legal and policy issues related to mining.

Sikwese cited an interactive dinner for the parliamentarians and 15 community representatives from three mining districts of Karonga, Mzimba and Phalombe which CCJP in partnership with Centre for Environmental Policy and Advocacy (CEPA) hosted in Lilongwe in December as one of the activities that CCJP executed as a way of advocating for a people-centred mining sector legal framework.

We went to the length of producing an abridged version of the Mines and Minerals Bill; selecting areas of interest to the rural communities and enlightening the grassroots on the same, so that they are well-informed, to allow them to rightfully demand what it is right for them,

Together with our partners we facilitated learning and exchange visits among affected communities, disseminated and raised awareness on mining policy and legislation and roles of communities in monitoring development agreements entered into with mining investors, 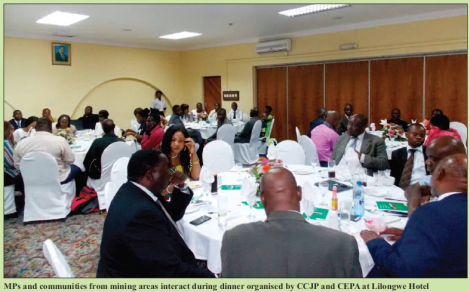 Sikwese, therefore, said throughout implementation of the project, CCJP and the Catholic Church have identified several opportunities that can be utilised to exert the church’s influence towards ensuring that Malawi’s natural resources benefit the society in a transparent and accountable manner.

For instance, through the project, the Church has found a voice in the Malawi Extractives Industry Transparency Initiative (MWEITI), where CCJP, through Sikwese, serves as a member of the Multi-Stakeholder Group (MSG), which comprises representatives from Government, CSOs and Mining Companies.

Through CCJP, the Church is also a member of Publish What You Pay (PWYP) Malawi Chapter; a grouping of local CSOs in partnership with some international non-governmental organisations (NGOs) determined to undertake an efficient and effective national campaign for transparent and accountable management of the extractive sector.

The church is also privy to updated information regarding current trends in Malawi’s mining sector such as the results of the Countrywide Airborne Geophysical survey which produced data illustrating Malawi’s mineral potential, through CCJPs involvement.

Such information alerts the Church, giving it an opportunity to prepare communities for what is to come, as it continues lobbying and advocating for reforms in the institutional, legal and policy framework in the mining sector,

Tonse Tipindule Project targeted nine districts of the country including Chitipa, Karonga, Mzimba, Phalombe, Mwanza, Mulanje, Mangochi, Ntcheu and Balaka but CCJP observed that there is a dire need to spread the outreach to other districts as well as come up with diverse areas of focus in terms of subjects of sensitization and capacity building in order to adequately empower communities.

Throughout the implementation of the project, Sikwese said major challenges such as lack of trust among key stakeholders – CSOs, Government and Mining companies-, were met, which made effective engagement among players difficult, resulting in insufficient address of people’s concerns.

This means that some of the communities in other districts where mining activities are taking place or will take place lack the capacities to understand and participate meaningfully in mining activities. So there is need for continuation of interventions to allow those who are still in the dark see the light in as far as mining is concerned,

Father Henry Saindi Secretary General for Episcopal Conference of Malawi (ECM), under which CCJP operates is on record to have hailed the Church’s involvement in the mining governance activism describing it as a well-thought after idea as religious organisations are formed to address social ills that the people face to ensure justice and peace in the society.

The father said the church remains a beacon of light that provides guidance towards achieving anything good for the nation.

It is the duty of the church to attend to both the social and spiritual needs of the society as the two affect each other in one way or another. So, incorporating the church in any good course that will bring development and make people happy is quite commendable, as God’s spiritual light of will guides the project to success, which will help to meet the social needs of the nation,

CCJP National Secretary, Martin Chiphwanya, said the Catholic Church in Malawi recognises that if well managed, the mining sector can contribute to development in a number of ways as it is the case in other countries.

Mining has spurred creation of sectors such as transportation, construction, equipment manufacturing, geological services, education and research. Additionally, it has generated employment, revenue and other opportunities for economic diversity. All we have to do in Malawi is strive to set things right and the country will reap all these benefits,

He said it is imperative for churches and civil society to intensify projects on good mining governance to ensure effective management of mineral resources because if they are not properly managed, the resources become a curse.

A World Bank report states that 3.5 billion people live in countries rich in oil, gas or minerals, but these resources have become a curse in a way that most of these countries suffer from poverty, corruption and conflicts.

It is against this understanding that the Catholic Church in Malawi has taken an active role in ensuring that the extraction of Malawi’s natural resources should not become a curse but a blessing to all Malawians, especially the poor and vulnerable groups,