This month, an Oxfam analysis of agreements the Government of Malawi signed eight days before the 2014 elections reveals their weak and incoherent tax terms; this was followed by civil society calling on the president to not approve the renegotiated addendum until an investigation has been launched. One environmental activist released a book on Lake Malawi and oil, while the government was expected to report to UNESCO on the status of oil and gas licences that overlap with Lake Malawi National Park, a World Heritage Site.

Still on the lake, Malawi and Tanzania continue to seek mediation on the territorial dispute that resurfaced following Malawi’s issuance of petroleum exploration licences in 2012.

Mkango Resources and Sovereign Metals share news on exploration activities and progress, and Paladin predicts promising uranium prices in the medium- to long-term, but resumption of production at Kayelekera is not expected until prices increase substantially.

Oxfam Malawi released a groundbreaking and revealing study on Malawi’s oil sector and agreements this month, which was followed up by the call from Malawi’s Natural Resources Justice Network (NRJN) and Publish What You Pay (PWYP) to

Given the purported irregularities around the initial signing of the contracts, ongoing Anti-Corruption Bureau investigations, the absence of transparency in the renegotiations, the lack of a clear petroleum policy, an updated Petroleum Act, a completed model contract and comprehensive financial modelling, we as NRJN and PWYP Malawi are calling on the President not to approve the addendum until a full public inquiry has been concluded into the current agreements.

Read the report ‘Malawi’s troubled oil sector: licenses, contracts and their implications‘ produced by Canada-based Resources for Development that documents and analyses incoherent and poor tax terms, the signing of agreements behind the backs of key senior civil servants and against the advice of the Solicitor General.

Incidentally, four oil and gas exploration companies in Malawi have been asked to comply with Malawi’s first Extractive Industries Transparency Initiative report along with 21 other companies (‘25 extractives companies in initial EITI reporting exercise‘).

Three of the six petroleum exploration licences overlap with Lake Malawi and one of these covers Lake Malawi National Park which is one of Malawi’s two World Heritage Sites. The government has not provided a substantive update on the status of oil exploration in the World Heritage Site to UNESCO – NRJN and PWYP Malawi followed up on this requirement late last year and were told by UNESCO that the Government of Malawi had until the beginning of February to provide the required, and overdue, State of Conservation report.

A welcome development this month has been President Arthur Peter Mutharika assenting to the Access to Information Bill, and civil society working in the extractive industries said that this is bodes well for people who live near to mining projects.

The Tanzanian civil society representatives that were arrested during a study tour to Malawi in December 2016  remain in detention.

Civil society organisations, activists, and residents from mining communities gathered this month in Cape Town for the Alternative Mining Indaba, which coincides with the largest mining investment conference in Africa that takes place annually. I wrote about it last year with Antonio Malfense Fierro for The Conversation.

“Has mining benefitted the community?” asked Malawian activist Paul Mvula. “To answer this question, you just have to go into the community.” Mvula flicked through a slideshow of photos: dysfunctional boreholes, corrupted water sources, abandoned toxic waste sites – and shiny 4x4s driven by the chiefs in mining areas.

Also this month, environmental activist Godfrey Mfiti (see his presentation and video interview from last year) launched a publication Lake Malawi: The Coming Disaster in Blantyre. I plan to review this once I receive a copy – the Lilongwe launch will take place at the end of March.

Watch the video below of Mfiti talking about the book.

Mkango Resources announced at the beginning of February that it will commence exploration work on its Thambani licence in the first quarter. Uranium (and associated tantalum and niobium) is the primary focus of the planned exploration and Mkango will also evaluate the area for its lithium potential.

Sovereign Metals was in Cape Town during the Mining Indaba and presented at the 121 Mining Investment Conference. The ASX-listed company is targeting low cost production of flake graphite in Malawi with a promising licence area in Malingunde, near Lilongwe. The company presentation is now online.

Paladin Energy shared its half-year conference call presentation delivered on 15 February. The company posited that the rationale for stronger medium- and long-term uranium prices is compelling, but Kayelekera is maintained on a minimum expenditure and care and maintenance basis. Nyasa Times reported that the Minister for Natural Resources, Energy and Mining Bright Msaka said in parliament that

We however have information that the prices of uranium are getting higher now and we expect the mine to resume its operations in a month’s time.

This is not the case. Even when (if) operations do resume, the company has reported that 12 to 18 months would be required to restart the mine and ramp up production; prices remain far below the break-even price for the mine, as Grain Malunga and I showed in a financial model we prepared with OpenOil using public domain data.

The Nation reported on this financial model a couple of weeks ago, but it should be pointed out that the figures were not accurately reproduced, which explains the Minister of Finance’s response. So please look at the financial model for yourself. The key findings were:

The Mining & Trade Review reported that Trump ushers hope on Malawi’s Kayelekera. And Paladin Energy’s CEO, Alexander Molyneux, talked about the Company’s restructure plans and its outlook for the uranium market. Watch the video.

The territorial dispute between Tanzania and Malawi, believed to have flared up a few years ago when the Government of Malawi issued petroleum exploration licences over northern Lake Malawi, continues to make headlines. Nevertheless, the two countries signed a Joint Permanent Commission of Cooperation agreement in February. Tanzania’s Foreign Minister Augustine Mahiga commented

This issue [lake dispute] is now under revived discussion under the auspices of the three-member committee led by the former president of Mozambique Joachim Chissano and former presidents of South Africa Thabo Mbeki and Botswana Festus Mogae.

But no reason that cooperation between the two countries should be halted and taken hostage to this issue because the other issues are probably even more important. Because this [will] highlight the fact that the areas of cooperation between us is not just the issue of the lake.

There are other equally important, maybe even more important, areas of cooperation, which invariably have to be addressed by the two neighbouring countries.

For us where we have these other outstanding issues, it is a positive input in creating a congenial atmosphere for these mediators to be able to work. And it brings together not only the governments, but also the people. So, this must be seen against this background that it is an exercise in confidence building and trust-building between us.

Last year, a map was published in Tanzania that extended Tanzania’s national border onto Lake Malawi, the disputed area. The discussion on maps continued, and Tanzanian Minister Mahiga argued,

The British and the Germans left different kinds of maps that show the border in between and certainly even from my school days, this is the map that we used to see.

It is not a new map, but it is an inherited map which I think needs clarification and that is why even the name of the lake in Tanzania is Lake Nyasa and here you call it Lake Malawi, and of course the name Malawi came after the independence of your country. 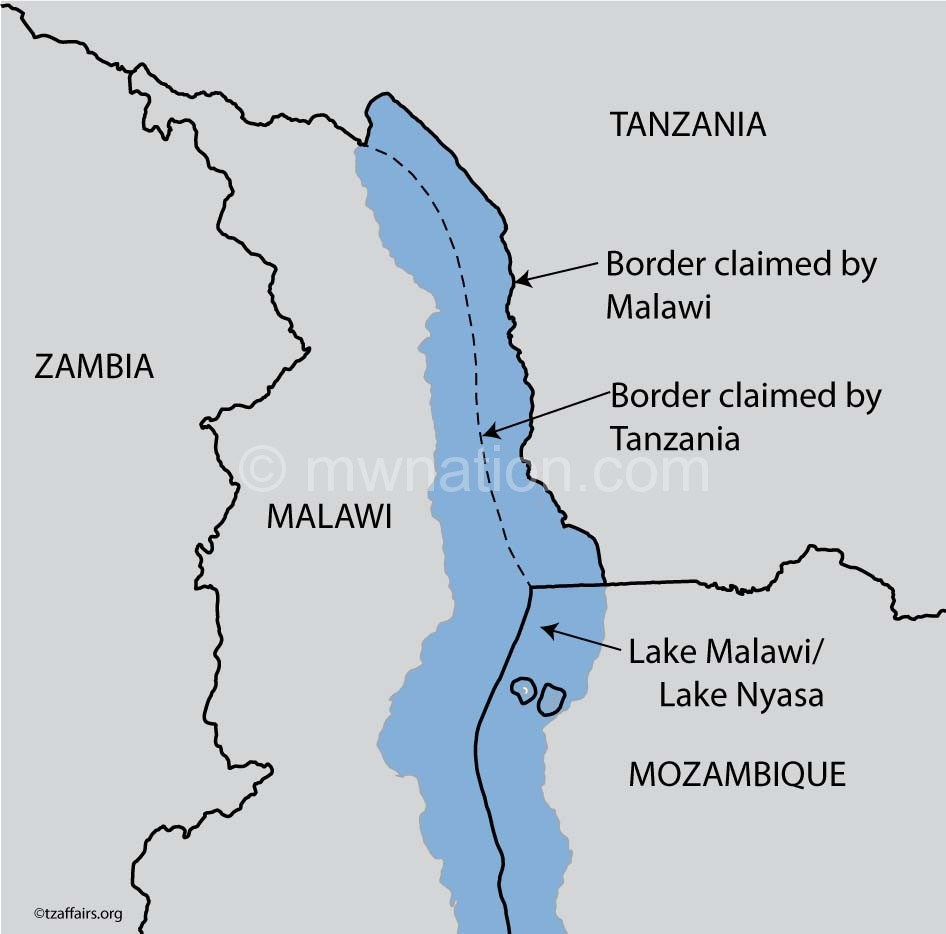 Published in The Nation, originally from tzaffairs.org; note that the ‘border claimed by Malawi’ is the border as agreed between Germany and Britain in the 1890s and endorsed by the Organisation of the African Union.