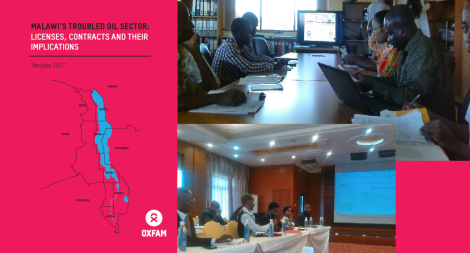 ‘The oil agreements were signed but the model agreement was only 80% complete’ stated senior government officials who were involved in developing a model production sharing agreement for Malawi’s oil and gas sector.

The question still remains why agreements were signed for three of the six petroleum blocks in Malawi eight days before the 2014 elections against the advice of the Solicitor General Janet Banda and before the fiscal terms of the model agreement had undergone analysis. They were signed by the Ministry of Mining – leaving out the Finance minister and principal secretary – before Malawi’s outdated petroleum legislation has been reviewed and in the absence of a policy to guide the sector.

Oxfam Malawi launched the report ‘Malawi’s troubled oil sector: licenses, contracts and their implications‘ yesterday in Lilongwe with the Malawi Extractive Industries Transparency Initiative (MWEITI) group – made up of government officials, civil society, and the private sector – as well as the media. There was contention over the title of the report, but the content went uncontested. Civil society also explained they have been seeking information on oil and gas contracts formally since early 2016 and particularly through MWEITI, but without much success.

Don Hubert, President of Resources for Development, explained that for citizens to receive a fair share for their natural resource wealth the first step is negotiating good contracts. His approach is to do ‘investor analysis for citizens’ as the owners of the minerals and this analysis helps to protect their interests. A discussion of the economic analysis of the production sharing agreements the government signed days before the 2014 elections will follow in another post.

Hubert explained that Malawi has made ‘really good progress’ in mining since the initial contract with Paladin – introducing new laws (fiscal regime passed and the Mines and Minerals Bill is with the Ministry of Justice) and clear national policy, calibrating the fiscal regime, and making contracts public. However, the conclusion for petroleum is not so good, Hubert pointed out that the law is outdated (1983), there is no national policy, there are incoherent fiscal terms (in the contracts), and the contracts are secret. A Department of Mines official responded that they are working on the law and have a ‘triple zero draft’ of a policy. Yet The Nation reported today,

On the other hand, the Peter Mutharika administration has continued to push the deals [renegotiation] in secret without guiding policy and an enabling Act, the report has said.

In the mid 2000s, the oil prices were extremely high, followed inevitably by increased exploration, and oil and gas reserves were found in East Africa. In 2009, the Malawian government created six petroleum blocks, and six licences were awarded between 2011 and 2013. Three production sharing agreements were signed in 2014. These were based on a draft model production sharing agreement that the Government of Malawi developed; this was 80% complete in March 2014, but the section on the fiscal terms was not finished. Political pressure was put on government officials to finish the contract but they said it was not possible in the short time frame. And then, a few months later, senior civil servants learned the contracts had been signed by the minister and principal secretary responsible for mining with RAK Gas MB45 and Pacific Oil.

Following the elections, in December 2014, the Attorney General Kalekeni Kaphale was asked to review the contracts. He looked at whether the licencing and contract sequence was correct and concluded that it was appropriate to sign agreements before exploration. He further examined the limits of ownership on whether related companies can hold more than two blocks and he concluded the law was not clear. However, he did not look at how RAK Gas or Pacific Oil acquired the contracts (and if any payments were made) and he did not look at the content of the agreements. Currently, the government is renegotiating the contracts to add an addendum, but there are still lingering areas of uncertainty, many that have been raised before:

A second post will follow to discuss the main findings of the analysis of the fiscal terms of the production sharing agreement, which are sometimes incoherent, inconsistent with international best practice, and overly generous to the company.

Yet even while Malawi was implementing the principles of international best practice in the mining sector it was ignoring them in the oil sector. Exploration licenses were granted without a national policy framework. A production sharing system was adopted without revising the badly out-dated Petroleum Act. A model contract was prepared in order to minimize the provisions open for negotiation, yet many of those agreed clauses were subsequently changed.

Disclosure: I worked with Resources for Development on the analysis.