Despite continued discovery of anomalies of high value minerals and sizeable quantities of industrial minerals in ongoing exploration activities, Malawi’s minerals sector has failed to move to greater heights in the year 2016 due to the prevailing low commodity prices on the world market and unavailability of low cost power from the national grid, which is weighing on the feasibility of mining projects.

The Malawi Government confirmed a number of mineral anomalies in the country in the high resolution geophysical survey dubbed Kuniuni which was executed with financing from the World Bank and European Union as part of the Mining Governance and Growth Support Project.

Minister of Natural Resources, Energy and Mining, Bright Msaka launched the geophyisical data obtained from the survey in 2015.

Salima also says the data confirms the existence of known deposits of minerals such as uranium, coal, heavy mineral sands and rare earths.

For example, the Kasungu dyke and other areas where the magnetic method was used in the survey may be mineralised with chromium, Nickel, PGE, Copper and cobalt but requires follow up with ground geophysics and drilling to obtain samples

The other revelation from Kauniuni is that the Kayelekera deposit, where Australian group, Paladin Africa, was mining uranium maybe bigger than earlier mapped out.

The survey data also reveals that the Lower Shire Basin is mostly concentrated in the west of Ngabu fault and has a thickness of up to 9000 metres within the threshold of petroleum formation of at least 1500 metres.

The Malawi government is, currently, selling the data to interested investors but industrialists say there is low investor interest in mineral exploration activities at the moment because of the prevailing low commodity prices on the world market.

The low commodity prices resulted in the mothballing of the Kayelekera Uranium Mine following the Fukushima Nuclear Disaster which resulted in the closure of nuclear plants in Japan.

Depressed prices of commodities have also had a knock on effect on the start of mining at Malawi’s advanced exploration projects, which include Kanyika Niobium, Kangankunde and Songwe Hill Rare Earths.

A narrative report on the Kayelekera Uranium Mine presented by mineral sector consultant Grain Malunga and a member of the civil society advocating for sanity in the mineral sector, Rachel Etter-Phoya, at German-based consultancy OpenOil financial modeling training in Berlin in October, indicates that Kayelekera needs the current price of uranium to more than double to be able to reopen profitably.

Paladin Africa has reported losses of US$387 million to date because of the uranium price slump and the high operating costs related to electricity access. At present, operating costs are US$13-US$19 per lb more than the average global spot price for October.

Paladin Africa, which also runs the Langer Heinrich Mine in Namibia, is currently conducting a feasibility study to reopen Kayelekera and, according to the company, one of the factors that is weighing heavily on resuming production is the use of diesel generators to power the mine’s operations which is more expensive as compared to use of power from the national grid.

Malawi is, currently, experiencing a power crisis due to low generation capacity attributed to low water levels in the Shire River, which hosts the country’s hydro-power generation plants.

Market analysts, however, still remain optimistic that Kayelekera will come back on stream in the near future as the world’s focus is shifting to nuclear energy as a clean source of fuel and more nuclear plants are set to open in China and India in the near future.

There is also optimism on the rare earth front as Minister of Natural Resources, Energy and Mining, Bright Msaka, said when he graced the European Union funded Hi-Tech Alkcarb Expert Council meeting in Zomba that the government expects rare earths to become a key driver of the country’s economy in the near future considering their growing importance.

I understand that rare earths have diverse uses in high tech applications as they are important ingredients in permanent magnets, electric vehicles and consumer electronics. With these industries growing, the world market will definitely need Malawi’s rare earths and this is what attracted the Hi-Tech Alkcarb Project to focus on Malawi,

Malawi is also optimistic that the Kanyika Niobium Project will come on stream in the near future as currently discussions between the developer, Australia’s Globe Metals & Mining and potential off-take partners are still going on.

Globe Metals & Mining finalized a feasibility study including a bulk sampling study at Kanyika and is currently courting financial partners to kickstart mining.

Meanwhile, delays in the commencement of mining at Kanyika has negatively affected members of the local community who were in 2014 advised by the local government authority to relocate and stop cultivating their crops at the site to pave way for mining to start.

After years of waiting to be compensated, the communities have opted to resume their day to day activities at the site. 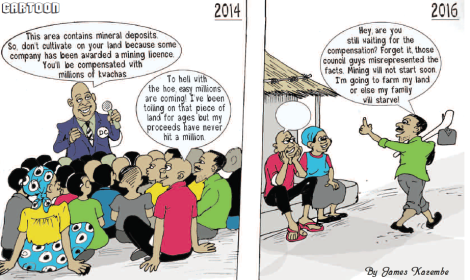 The contribution of mining to Malawi’s gross domestic product, which rose to above 3% when the Kayelekera Uranium Mine was on stream, has declined to a staggering 1%.

The article above was initially published in Malawi’s Mining & Trade Review Issue Number 44 that is circulating this December 2016.