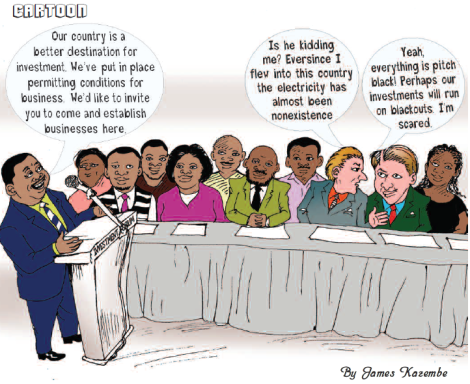 Local and international business captains have asked government to address the prevailing power crisis if the country is to attract meaningful investment.

The business gurus presented their concern to the Ministry of Natural Resources and Mining and Electricity Supply Corporation of Malawi (Escom) officials at an energy and mining conference which was held as part of this year’s Malawi Investment Forum (MIF).

The comments from my fellow businesspersons show that we indeed have investors willing to put their money in mining projects but they only want the government to ensure us of uninterrupted power supply. Of course, there cannot be mining without power,

said President of Malawi Chamber of Mines and Energy, Dean Lungu who is a Director for Bwanje Cement Company.

In response, Escom CEO John Kandulu assured the investors that Escom is putting in place measures to ensure that it increases its power generation capacity to meet the demand of the industry.

Kandulu told the investors that Escom’s plan is to generate up to 1050MW by 2018 and this will be possible with the supply from independent power producers and plants which the Corporation is developing.

He said Malawi’s electricity generation capacity has been seriously affected by the low water levels on the Shire River and Escom is working on both short and long term measures to address the situation.

Kandulu also said Malawi and Mozambique are advancing with the Mozambique-Malawi Power Interconnector Project, which will connect Tete in Mozambique and Phombeya in southern Malawi.

The project, which is expected to be commissioned in 2018, will be implemented with financing from the World Bank and entails construction of a 400kV power line from Tete to Phombeya.

The second phase of the Mozambique-Malawi interconnector project will see the construction of a 400kV interconnector from Phombeya Substation in Malawi to Nampula in Mozambique to enable Malawi wheel power from the energy rich Tete Province to Nampula Province on the other side of Mozambique.

Malawi is also pursuing an interconnector project with Zambia which will involve construction of 330kV power line connecting Chipata in Zambia and NKhoma Substation in Malawi.

Kandulu said in readiness for the increase in power supply from the interconnectors and the planned power generation projects, Escom is, currently, expanding its capacity by constructing high voltage power lines and upgrading its substations using funds obtained from the government of the United States of America through the Millennium Challenge Corporation.

Malawi’s power crisis has reached alarming levels and has seen areas going without electricity for up to 12 hours a day due to Escom’s persistent load shedding programme attributed to low water levels in the Shire River, where the power utility generates up to 99% of its power.

Escom has a generation capacity of 351MW against a peak demand of 400MW but the parastatal says it is currently only able to generate 200MW due to the low water levels.

The piece “Malawi Government taken to task on power crisis” featured above was initially published in Malawi’s Mining & Trade Review Issue Number 43 that is circulating this November 2016.