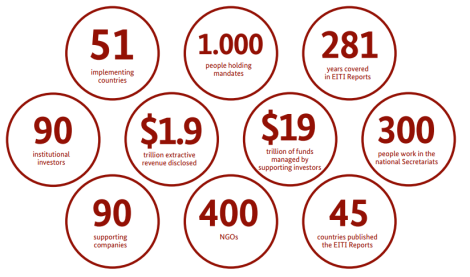 The impact of EITI: What should Malawi strive for?

Malawians started advocating for compliance with the Extractive Industries Transparency Initiative (EITI) over seven years ago in a bid to ensure that mining, oil, gas and forestry projects and associated revenue contribute to the country’s development. Malawi finally became a candidate country in 2015, joining one of the largest global transparency and accountability movements. Malawi’s first EITI report – documenting the extractive industries and reconciling government receipts with company payments for a set of companies – will be ready next April. What positive impacts can be expected from participating in EITI? This is a question that has recently been tackled in a GIZ-financed study Assessing the Effectiveness and Impact of the Extractive Industries Transparency Initiative (EITI) (September 2016).

The study, managed by LBN Strategies, highlights the relevance of the adaptable multi-stakeholder initiative as over 50 countries and most resource-driven countries have joined  although there is “a notable absence of EITI adoption amongst the BRICS and the largest oil producers globally” (p.86). It may be difficult to distinguish the results of EITI from other initiatives, but it has contributed to helping countries identify risks and weaknesses in the regulatory framework and in fiscal regimes, and improve understanding on how natural resources can be better managed. Companies and investors may also benefit from having a clearer picture of risks, and EITI gives civil society a platform and evidence to be able to discuss key political issues and taboos openly and safely. Since 2013, the Standard has expanded to include disclosure of contracts and beneficial owners, the role of state-owned enterprises, subsidies given to producers and consumers, and to address transfer pricing, tax noncompliance, smuggling and fraud.

EITI’s most obvious effect, according to the study, is that stakeholders come together in the multi-stakeholder group and work towards the common goals they define under the national EITI work plan. This means different government departments have a space to start or improve coordination and other stakeholder groups such as civil society can address specific concerns with the private sector and both of these groups can get institutionalised feedback from government.

The study also points out an important way EITI can improve. There is currently no

overall strategic approach based on a theory of change with a log frame that can be monitored and […be] the backbone for evaluating the effectiveness and impact of the EITI.

This would be useful for informing the future direction of the initiative to ensure its continued relevance and impact. Monitoring and evaluation at the national level tends to focus on the EITI steps and requirement s (outputs) rather than measuring impact and outcomes, suggests the study. Such measurement could provide evidence to justify the use of government taxes (whether domestically raised or channelled through development assistance) on the initiative, especially beyond those already in the so-called “transparency club”, and to adjust the initiative at the country level to check the annual production of data and work plan managed by the multi-stakeholder group translates into public management reforms.

A mixed-methods approach was used to explore stakeholder experiences and perceptions of the future for the initiative. There understandably continued high expectations for EITI going forward especially for its contribution towards the efficient use of revenues, better management of ecological effects and social tensions, fiscal transparency, and ease of doing business. In less than two years, Malawi will undergo a validation process to determine its compliance with EITI and it will be critical to take stock of the extent to which EITI is contributing to these areas. For now, attention needs to be on ensuring Malawi meets the deadline to produce the first EITI report next year, and that the data and findings are used to improve the way we manage our resources.

The piece “Eye on EITI: The impact of EITI: What should Malawi strive for?” featured above was initially published in Malawi’s Mining & Trade Review Issue Number 43 that is circulating this November 2016.

2 responses to “The impact of EITI: What should Malawi strive for? – Mining & Trade Review (November 2016)”