Members of staff from Department of Mines in the Ministry of Natural Resources, Energy and Mining recently hosted an emotional send-off party bidding farewell to Director for the department Charles Kaphwiyo, who retired after 33 years in the civil service.

The event which took place at Department of Mines’ offices in Lilongwe attracted several top officials from the ministry and private sector representatives who all spoke highly of the veteran geologist who served in different capacities including that of Director of Geological Survey and Commissioner for Mines.

The private sector was represented by President of Chambers of Mines and Energy Dean Lungu, Mkango Country Manager Burton Kachinjika, one of country’s top consulting geologists John Nkhoma of Chiwandama Geo-Consultants, just to mention but a few.

Kaphwiyo retired while serving as a Director/Commissioner of Mines and Minerals in the ministry and he was hailed for spearheading a lot of progress on important issues in the mining sector.

Speaking during the function, Wona said with so many achievements within the 33 years of his service, Kaphwiyo has laid down a clear path envisioned with a direction that would lead to more achievements in the mining sector.

We will miss his services but all we can do is just to express our heartfelt appreciation for the huge impact his great works and efforts have had in the ministry. Still, we will be looking forward to his further support within the sector as he embarks on his life in private endeavours,

He said Kaphwiyo has left big shoes difficult to fill but the good thing, he said, is that he imparted his immerse knowledge to others;

not only about work but also how to relate with each other and the field out there.

Lungu praised Kaphwiyo for his humble and accommodative approach to issues which, he said, has led to the establishment of a good working relationship between government and the private sector.

Since you are now no longer a government official, we would like to officially welcome you to the private sector and we believe we can use your experience and channels you have established to achieve greater things for the sector, 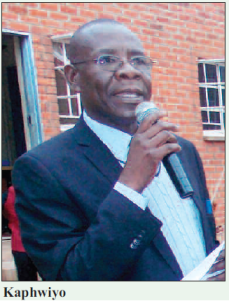 He also had a passion in grooming junior officers in the sense that he initiated as well as facilitated numerous capacity building programs for staff in his department.

Artisanal and small scale miners also benefited from his efforts, as he initiated training workshops for miners, equipping them with important information regarding their trade.

Kaphwiyo was recruited in the civil service on July 25, 1983 when he was employed as a Geologist at Geological Survey Department in Zomba and he quickly rose through the ranks. He was appointed as Senior Geologist on February 6, 1986 on and then Principal Geologist on August 11, 1988.

His journey up the ranks continued on November 4, 1993 when he was made an Assistant Chief Geologist, a position he served for six year before attaining the Chief Geologist post.

On April 24, 2002, Kaphwiyo was appointed Deputy Director of Geological Survey, before being transferred to the seat of government in Lilongwe on August 29, 2011 where he took the post of Director of Mines and subsequently    Commissioner of Mines and Minerals up to May 31, 2016 the day he called it a day as government officer.

The piece “Malawi Director of Mines Kaphwiyo retires in style” featured above was initially published in Malawi’s Mining & Trade Review Issue Number 42 that is circulating this October 2016.