A resource curse that is Mwaulambo Village in Malawi

By Church and Society- Livingstonia Synod

Is Karonga district a case of resource curse? The resource curse (also known as the paradox of plenty) refers to the failure of many resource-rich countries to benefit fully from their natural resource wealth, and for governments in these countries to respond effectively to public welfare needs.

Considering the challenges that the people of Mwaulambo have gone through amid the plenty resources within their community, they more or less have become a curse rather than a blessed society.

The district borders Tanzania to the North and Chitipa to the West.

According to the District Social Economic profile, the district is endowed with a number of mineral resources such as uranium, coal, limestone, among others.

Coal and Uranium have been exploited.

There are also strong indications that the district also has oil and gas. Surveys are currently underway to establish the hydrocarbon occurrence.

On 19th December, 2007, Eland Coal Mine Company Limited was granted a mining licence by the Ministry of Energy and Mines to mine coal in Lufira coalfield.

With the coming in of the mine in the area, surrounding communities hoped for employment and other developments in their area.

This was further consolidated by a memorandum of understanding through which the company promised that it would provide portable drinking water, a clinic, school blocks, staff houses and solar energy. Sadly, none of these promises have been fulfilled.

The coming in of Eland Coal mine was unprocedural.

This is according to Group Village Headman Mesiya.

We only came to know about the existence of the miner when he was already at the site,

Here one tends to see how local councils were ruled out in the whole equation. Instead of the councils being part and parcel of decision making as local governance structures, they were only recipients. This promoted top- down approach against the established decentralization policy in Malawi.

This again created tension among the locals who were wondering who the investors were but also what they intended to do.

The conflict also escalated between the local council and central government.

Central government was forced to travel to the local council to clarify that the investor was indeed allowed to operate in the district by government.

Some years down the line, another conflict ensued between the community and the company.

Communities were again embroidered in a conflict with the company over compensation, relocation, and employment.

It took the intervention of Church and Society Programme of the Livingstonia Synod with funding from Tilitonse Fund to help address some of these concerns.

For instance, Church and Society Programme advocated for fair compensation and the compensation packages were raised from around MK 50, 000 for a family to figures ranging up to MK 3million.

Fast track to 2016, Mwaulambo coal mine is a deserted area. No one is in charge of the site. Neither Karonga  district council nor the Ministry of Natural Resources, Energy and Mines Headquarters are aware whether the company has left the site or not.

If indeed the miner has left the site, this is a clear violation of Section 46 subsection (1)(a) of the Mines and Minerals Act of 1981 which states that ‘the holder of a mining license shall give notice to the Commissioner for Mines, 12 months in advance if he proposes to cease production…’.

Since civil society organisations in Karonga alerted the government on 14th August, 2015 about the company leaving the site through a petition, government has not taken any tangible steps to address the issue.

One is left to speculate that somebody somewhere within government is aware about the plans that Eland had to disappear from the site. He/she thus, assisted the company to leave the site by way of violating the laws of the land.

This is a clear case where some politicians or government officers have purposefully dismantled societal checks or created new regulations to get access to these resources for their own benefits. It is a good case that befits investigation on the part of the Anti-corruption bureau.

If this issue is not investigated, it further consolidates the resource case argument that institutions are weaker in resource-rich countries because it is easy for elites to capture or take large sums of cash.

When Church and Society Programme (CSP) visited the mine between 13th and 14th September, 2016, what remain are the crusher plant, dumping truck, stores building, and an organ machine. The area is not secured and has heaps of coal all over. The area also has deep trenches filled with toxic waters.

The water is hazardous to human and animal health since it contains high concentration of chemicals such as carbon,

The dams have now turned into swimming pools for children. Animals such as cattle, goats and pigs also drink water from the same sources.

My heart sinks whenever I reminisce that we have big trenches in our community. I remember one day when my oxen fell into the trench. I rushed to the scene with my sons and lucky enough we managed to rescue it,

recounts Lazarous Mapunga, a resident of the area. 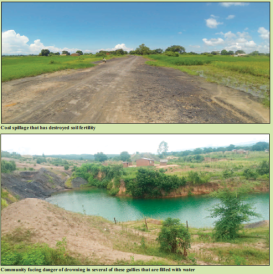 Rogina Nankhonde was not so lucky. He had an expectant pig that also fell into one of the trenches. She searched      everywhere but could not find it. She later discovered that the pig had fallen into the deep trench and by the time he found it, it was already dead and rotten. Rogina lost a pig that supported her household. This is another example of a curse that the people of Mwaulambo have to live with.

The big trenches are also an existing reality that also poses danger to children as witnessed by another member of the Mwaulambo Community, Mama Anna Nangonde.

One day my grandson went out to play. Little did I know that he went to swim with the older friends.  Being very young, he failed to swim and drowned. By the grace of God, he was rescued by his friends with the help of some older men. Since that incident, my grandson always complains of stomach-ache. I strongly suspect that the stomach-ache is as a result of the toxics that he drunk.

Cases of Rogina Nankhonde and Mama Anna Nangonde certainly shows how women have disproportionately been impacted by the mine in Mwaulambo.

Farmers in Mwaulambo have also cried foul due to the mining activities that have disturbed the environment.

As a farmer, I used to produce over ten bags of rice. It is now down to less than five. This is because my rice field has been contaminated with coal dusts,

It should be noted that this is a community that already endured a number of environmental problems whilst  mining was in operation. They included dust from mining, noise from the process operation and seismic disturbances.

It is precisely for these reasons that the community of Mwaulambo is calling for a thorough rehabilitation of their area as per the requirements of the Environmental Management Act.

GVH Mwaulambo retorted. He added that

If the trenches were filled we would replant trees on the bare grounds and start farming in some of the areas.

Considering the challenges that the members of community of Mwaulambo have gone through, Church and Society Programme of the CCAP Synod of Livingstonia has recently stepped up efforts to ensure that government and Eland Coal Mine are held accountable, courtesy of a Tilitonse funded project through Norwegian Church Aid (NCA). The project is titled Tonse Tipindule and is being implemented in Karonga, Mzimba and Chitipa.

The project held a mining indaba in August, 2016 at Mwaulambo. The project also worked with Times TV and Daily Times Newspaper and produced a news story about the trenches in Mwaulambo. The TV story appeared on 2nd September, 2016. Through the story, it was revealed through late Mr. Mweso of the Ministry of Mines, that     government was not aware that the miner had left the site. They further hinted that government had written the miner and were waiting for a response.

The project team also visited the offices of the District Commissioner, Director of Planning and Development, Human Resources Officer and Traditional Authority to engage them on the issue and using its paralegal department, the project has documented all the affected households. The project plans to use its paralegal department and partner with the Centre for Human Rights and Rehabilitation (CHRR), who are also willing to commence a case against both the investor and government, for failure to protect and promote the rights of the people of Mwaulambo.

In conclusion, the project has documented that Eland Coal Mine started without consent from the local government structures. This continues to show how central government, without involving local government, pushes investors to communities. This has had disastrous results on the community such as environmental damage, failure to follow the established law, kickbacks and conflicts. It is now not a secret that Mwaulambo community is a good example of a resource curse in Malawi.

[Mining in Malawi: This site was also researched during a new Human Rights Watch report “They Destroyed Everything”: Mining and Human Rights in Malawi“].

The piece “A resource curse that is Mwaulambo Village in Malawi” featured above was initially published in Malawi’s Mining & Trade Review Issue Number 42 that is circulating this October 2016.