Chikomeni Manda has shared his experiences of mining in Malawi’s Mzimba District with Mining in Malawi in the past and he even invited you to tour a mine. He recently announced that an Artisanal Mining Training Centre is being established in northern Malawi and has written about the challenges facing small-scale miners. Today makes a call for Malawians to address gemstone smuggling.

Chikomeni is a small-scale gemstone miner and a member of Mzimba Gemstone Mining Cooperative. He is engaged in gem marketing and capacity building of artisanal and small-scale mining in areas such as gemstone prospecting and mining, safety and good mining practices, gemstone grading and marketing.

Chikomeni can be contacted on: chikomanda [at] gmail [dot] com

Malawi losing out through gemstone smuggling

Malawi is blessed with vast mineral resources which are scattered all over the country. This is evident in the minerals which are being mined currently and seems promising with the newly released geological map. One of these mineral resources is grouped together as gemstones.

Some of these gemstones are of great value that they command large sums of money internationally. Some of the gemstones being mined in the country includes ruby, sapphire, tourmaline, aquamarine, and rhodolite.

The country has seen an increase in small scale mining activities in recent years due to the discovery of new gem deposits in Salima and Dowa Districts and Kafukule in Mzimba District just to mention a few places. These places have produced high quality minerals in sizeable volumes, attracting both local and international buyers in large numbers. Despite these positive developments, only a very small percentage is declared and exported through official channels, the rest is smuggled out hence depriving the country of necessary revenue.

Usually these gems are smuggled to the neighboring countries and exported to the world major gem markets from there. The most painful thing is that these smuggled minerals are not known as originating from Malawi but as from the exporting countries. This scenario means Malawi is not known as a gemstone mining nation because we let other countries export gems on our behalf. Therefore, there is great need for the government and other relevant stakeholders to take serious effort towards regulating the small-scale mining sector if the country is to benefit from these resources.

Gemstone smuggling often occurs at an individual level, when someone illegally moves gems across international borders due to a number of reasons as one gem dealer who stays in Karonga explains,

I applied for a dealer’s Licence 8 months ago, but up to now it has not been issued. So how can I export officially without a licence? And it’s expensive for me to travel to Lilongwe to process an export permit, it could have been better if we were doing it at the district assembly. Therefore, It’s easier for me to sell anyhow.

A delay in issuing licenses for small-scale miners, the high royalty rate at 10% and the lack of gemstone knowledge by customs personnel also exacerbate the problem because of their inability to recognize or spot gemstones, which creates the right recipe for smuggling. Hence, there is great need to train Customs and Immigration officials about gemstones because many minerals are smuggled through our border posts on a daily basis.

Foreigners are the ones who smuggle out gemstones after buying from illegal diggers, otherwise the majority of local miners don’t have the means and capacity to take the minerals across the borders. These buyers move from one mine to another buying minerals because they have financial power compared to local dealers, hence we cannot compete with them

Some have suggested that empowering mining cooperatives financially can help reduce the practice of smuggling because they will be able to compete effectively with the foreign buyers. Currently, there are four gemstone mining cooperatives in the country but these all face financial difficulties which means they cannot buy minerals.

The culture surrounding gem mining and individual attempts to avoid government control create a situation which results in gem smuggling.

Curbing gemstone smuggling is a core issue government continues tackling. Among others, the government is conducting sensitization meetings and trainings with the law enforcement authorities such as the Police, Immigration and Malawi Revenue Authority (MRA). Similarly, gemstone miners have been civic educated on gemstone exportation procedures. Further to this government is revising penalties for offenders in gemstone smuggling, hence, as Malawians we need to desist from helping foreigners smuggling minerals, that’s the best remedy

Therefore, it is up to us as a nation to combat this malpractice. We have already lost a lot of minerals which are being depleted on a daily basis and are not coming back. Its food for thought for every patriotic Malawian, let’s love our country and develop it using the resources the country has. 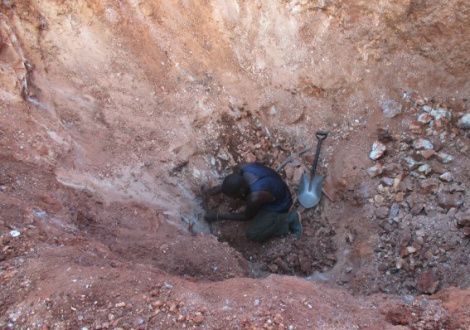 One response to “Views from Malawi’s ASM sector: Malawi losing out through gemstone smuggling”