Though mining is yet to start at its flagship Songwe Hill Rare Earth Project, Mkango Resources has emerged as a shining example in Malawi’s mineral sector on corporate social responsibility (CSR) initiatives.

The company, which owns 100% of the Songwe resource through its subsidiary company Lancaster Exploration, has substantially invested in community development projects in the Songwe area in sectors that include water supply, education, agriculture, culture, transport and infrastructure development. (See recent CSR video)

One of Mkango’s core principles is to ensure that there is poverty reduction, improved education and empowerment of previously disadvantaged groups within the communities that we work in.

Therefore, it is important for us to implement meaningful, sustainable and successful social responsibility programmes commensurate with the stage of exploration and development,

In the area of education, Mkango Resources is pursuing a programme involving the improvement of infrastructure and provision of learning materials to primary schools in the Songwe area.

This programme has seen the company partnering a local Malawian non-governmental organization, boNGO WorldWide, in a Happy Classrooms project that will see 24 classrooms renovated. To date over 15 classrooms within the primary schools of the area have been completed with artistic expressions depicting the school curriculum on the classroom walls and in so doing developing the classrooms into learner-friendly facilities.

The advantage of the Happy Classrooms Project is that children can learn using the walls even after school time.The decorated walls are bright and stimulate the children’s minds helping them learn better. In addition, the decorated walls offer teachers new teaching aids in the absence of text books and other teaching aids,as well asallowing teachers to use a broader variety of teaching methods. 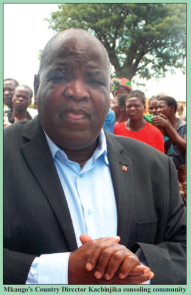 Through this programme, we are building a foundation for the future. Our aim is to educate and train children from the area so that when we rollout the actual mining works, we should not go elsewhere to look for employees but recruit from within.

We believe that the transformation of these school blocks will make both learning and teaching easier and we envisage improved grades on the part of the pupils.

Mkango also runs an annual competition where the top 3 graded boys and girls from the 3 local primary schools will get their secondary school fees paid for. The company also offers training programs for Malawian graduate geologists and sampling assistants and in addition has made donations of educational and sporting equipment to local schools.

In the agricultural sector, the company’s interventions are also visible. With the guidance of the National Small Holder Farmers Association of Malawi (NASFAM), Mkango has donated various kinds of seeds to the farming communities within the area it operates as one way of developing the impoverished farming communities.

The seeds donated to the community include that of high yielding variety of pigeon peas which is both a cash and food crop for the area and suites well the weather conditions.

The arrangement is that, upon harvest of the crop, each farmer is required to return 8 kg of the proceeds to Mkango Resources Ltd for safe storage, so that the seed should, also, be redistributed to other farmers in the following farming season.

The initiative is a seed build-up revolving fund which every farming household in the area should benefit from. The main aim of this intervention is to economically empower the communities because we have noticed that the area has high-levels of poverty so the crop yield would be used as a tool to alleviate the situation both through domestic consumption as well as sale of the surplus for income generation,

Mkango also invested in the development of various social infrastructures in the Songwe Hill area which include access roads, bridges and boreholes.

Two water boreholes and pumps were recently fully restored and donated to the nearby Wahiya and Nowa Villages, and other nine new and existing borehole pumps within the surrounding villages have continued to be serviced and repaired.

Local road and bridge maintenance programme is continuing, which, apart from improving local infrastructure, provides an alternative source of employment and income to the local communities. Mkango also previously refurbished seven existing bridges and constructed a new bridge, in addition to refurbishment of roads to Mphembezu and Maone villages, and to Songwe to provide all year round access.

The company also recently built and opened a new bridge to reconnect the refurbished road between Noah and Mphembezu villages.

Kachinjika explains that as a symbol of its commitment to supporting the local communities in the Songwe Hill area, Mkango last year donated various essential items to 470 householdsin the area whose livelihoods were seriously affected by flooding which caused wide spread devastation across Malawi.

We are substantially investing in CSR initiatives because our focus is on sustainable development aimed at reducing poverty and hunger,

A research project conducted by the civil society in Malawi with funding from Tilitonse Fund also gave thumbs up to Mkango Resources for its CSR commitments at Songwe Hill Project.

We are so far impressed with the community engagement principle and the CSR initiatives that Mkango is undertaking at Songwe. We hope they will continue on this path and fulfill the other pledges and we also ask other mining and exploration companies to embrace Mkango as a role model in Malawi on Corporate Social Responsibility,

There is no legislation in Malawi that currently governs corporate social responsibility. However, with the upcoming tabling of the revised Mines and Minerals Bill, which is set to update the 1981 legislation, mining companies will likely be requested to enter into community development agreements.

We always engage the community to propose projects that they want to be implemented in the  area because we regard members of the community as partners in the project,

On June 15, the TSX-V: MKA listed company announced that it has also been admitted to start trading on the AIM market of the London Stock Exchange.

We are very pleased to announce the successful AIM listing and placing, which together with our listing on TSX-V, provides the company with a strong platform moving forward. Over the last five years, Mkango has advanced the Songwe Hill rare earth project in Malawi from an early stage exploration target to an updated pre-feasibility in November 2015 (NPV10 US$345 million), and is now one of the very few listed rare earth companies globally with an advanced stage rare earth project, and the only focused rare earth company listed on the London Stock Exchange.

Based on extensive benchmarking and industry analysis, I am confident that Mkango has the potential to be a future low capex, lowest cost quartile, sustainable producer of rare earths, thereby providing a strong foundation for entering into partnerships, marketing and off-take arrangements.

Approximately 50% of global rare earth demand is attributable to clean technologies so we are well positioned to benefit from global growth in this sector, for example hybrid and electric vehicles, wind power and catalytic convertors. Furthermore, in terms of other rare earth applications, we anticipate China, India and emerging economies to fuel a long-term surge in consumer technology demand growth.

Besides Songwe Hill, Mkango is conducting preliminary exploration work at Thambani in Mwanza and the company previously reported that data collected by the Malawi Government through the World Bank financed Countrywide Airborne Geophysical Survey confirmed radiometric and magnetic anomalies in the licence area.

We are very excited with the results of the airborne survey, which further confirms significant potential for uranium, niobium, tantalum and other minerals in the Thambani licence. This area benefits from good infrastructure; including roads, power and a new railway line passing through the south of it. To date, the market has yet to recognize Thambani’s potential and we continue to look at opportunities to maximise value,

The piece “Mkango shines on corporate social responsibility” featured above was initially published in Malawi’s Mining & Trade Review Issue Number 40  that is circulating this August 2016.