Last week on 12 July 2016, the Government of Malawi under the Malawi Mining Governance and Growth Support Project (MGGSP) held an inception meeting to mark the beginning of the development of a digital mineral rights management system and online portal to improve the way mineral rights are awarded and managed.

Spatial Dimension has won the bid to develop their FlexiCadastre which is being financed by a USD 25 million loan to the Government of Malawi from the World Bank.

Acting Director of Mines Ackim Atileni Wona welcomed over 40 participants from government and civil society. He was followed by MGGSP Coordinator Hastings Chipongwe who gave an overview and progress report on the MGGSP. Chipongwe highlighted the following as progress made under MGGSP:

Gibson Nyirenda, Senior Mining Engineer responsible for the Mineral Rights Section at the Department of Mines, focussed the attention of participants on the current challenges of the mineral rights management system which will be addressed through the development of FlexiCadastre.

He explained that the paper-based licence and manual GIS-based systems make it complicated and time consuming to handle large application volumes which means applicants often have to wait a long time for a response on applications for licences. Other relevant stakeholders are also not able to access data easily at present including the Malawi Revenue Authority, the Extractive Industries Transparency Initiative Secretariat and the Geological Survey Department which results in poor stakeholder communication. These challenges and others result in a loss of government revenue and also serve as a disincentive and cost to investors. 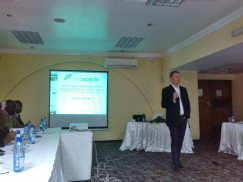 The new system will “create transparency in the mining sector”, FlexiCadastre Consultant Charles Young explained. This technology to be introduced will include an internal mining cadastre system for different government departments to use and a mineral rights web portal that will be accessible to the public (take a look at Zambia’s portal here). The internal system is based on the business processes of a licence and modelled on Malawi’s legislation. It will therefore integrate applications, licencing, mapping, monitoring and revenue management at the least.

The project will be implemented over nine months with 12 months of subsequent support. In the future, the government will have to pay Spatial Dimension for maintenance and upgrades.

Young said there there are two ingredients necessary to ensure FlexiCadastre is a success – strong leadership and long-term dedicated staff. Without these, the best of systems will not be successful. As the system will be based on Malawi’s mineral legislation, it is also vital that the new legislation is passed soon so that it can be reflected in the system.

Participants discussed two particular risks that need to be addressed – internet accessibility can be problematic and expensive but is required should the system be cloud-based and the sustainability of the FlexiCadastre needs to be considered immediately as the annual maintenance cost must be budgeted for to ensure smooth operations and system effectiveness.