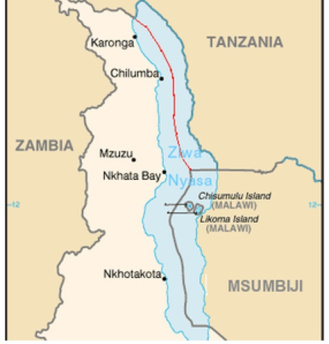 Tanzania redraws its borders to include part of Lake Malawi

War with Words: A View from the Other Side of Lake Malawi

On 19 November, we posted “Words of War: The Lake Malawi Dispute Rages On” on the current dispute between the Government of Malawi and the Government of Tanzania over ownership of Lake Malawi. The outcome of these disputes is critical as one company, Surestream Petroleum, has already been granted a license to explore for oil in two zones of the lake.

The Government of Tanzania has now criticised CNN’s reporting on Lake Malawi, which Tanzania refers to as Lake Nyasa.

Cable News Network (CNN), an American international channel, has for three consecutive days — been running a programme on the border dispute between two countries, with a standpoint  that the boarder is located on the shores of Tanzanian side.

Now the Tanzania government, through its Information department (Maelezo), has called upon the highly respected international channel to put the record clear by correcting  itself.

Assah Mwambene, director of the Information Services department, yesterday held a press conference in Dar es Salaam at which he called upon the most respected television channel to stop misinforming the world about the ongoing boarder dispute.

“The Tanzania government has called upon CNN international to correct the misleading information concerning the Lake Nyasa border dispute between Tanzania and Malawi,” he said.

Mwambene said the government had since written the international channel seeking correction of the information broadcast. However, he could not say exactly when the letter was written.

One response to “War with Words: A View from the Other Side of Lake Malawi”