Last week, the African Minerals Development Centre (AMDC) hosted a communications workshop on the Africa Mining Vision in Lilongwe, Malawi. This was held at the same time as the launch of the new capacity building project on Mining Contract Negotiation.

The three-day workshop, held at the Bingu International Conference Centre, brought together civil society and media practitioners. This covered training on the Africa Mining Vision and sessions on how to report on mining led by Jessica van Onselen, on artisanal and small-scale mining led by Prof Nellie Mutemeri (Wits University), on media led by Sandra Macharia (UNDP) and on civil society led by Rachel Etter-Phoya (Citizens for Justice).

During the session on how to report on mining, van Onselen shared that there are a number of tensions that need to be managed when reporting or communicating about mining.

Malawi has committed to implement a Country Mining Vision following the 2009 endorsement by African Heads of State of the Africa Mining Vision at the African Union. The Vision is

Africa’s own response to tackling the paradox of great mineral wealth existing side by side with pervasive poverty.

The Africa Mining Vision is holistic. It advocates thinking outside the “mining box”. Accordingly it’s not just a question of improving mining regimes by making sure that tax revenues from mining are optimized and that the income is well spent – although that is clearly important. Rather it’s a question of integrating mining much better into development policies at local, national and regional levels.

As Malawi proceeds with its Country Mining Vision, the effective adoption of a new mining policy in a country should not – and must not – be restricted to politicians, lawmakers and technical departments: it requires awareness, support and interest from the broader host society to be truly successful. Recognising this need for broad-based support, the Malawi advocacy and communications workshop focused on strengthening the media and civil society organisations’ capacity to communicate on mining and mineral policy issues in Malawi.

The workshop was supported of UNDP Malawi and financed by the German Development Cooperation through GIZ. 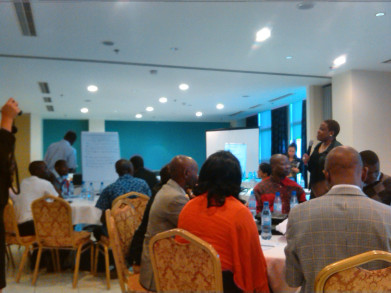 Sandra Macharia (UNDP) facilitating a session on the media and mining. Civil society and journalists gather to discuss how to communicate on mining and development.