Chikomeni Manda has shared his experiences of mining in Malawi’s Mzimba District with Mining in Malawi in the past and he even invited you to tour a mine. Last month, he announced that an Artisanal Mining Training Centre is being established in northern Malawi. Today he writes about the challenges facing small-scale miners.

Chikomeni is a young small-scale gemstone miner and a member of Mzimba Gemstone Mining Cooperative. He is engaged in gem marketing and capacity building of artisanal and small-scale mining in areas such as gemstone prospecting and mining, safety and good mining practices, gemstone grading and marketing.

Chikomeni can be contacted on: chikomanda [at] gmail [dot] com

25 YEARS A GEMSTONE MINER AND YET STILL LIVING IN POVERTY

I usually ask myself this question, is mining a curse or a blessing? I have seen many small-scale miners in my life producing top quality gemstones in their mines and yet they are still very poor to date. Maybe is it due to poor marketing systems or lack of financial management skills. What is really wrong as these miners produce one of the most fascinating, precious and expensive products that the world has cherished for generations?

Gemstone mining is usually a lucrative business, so they say, but the sad thing is that these miners are some of the poorest guys in this world. Malawi is one of the countries with these resources and as such, many people are involved in extracting these mineral in different parts of the country such as in Mzimba, Ntcheu, Salima, Dowa and many other areas. Some of the notable gemstones mined in Malawi include ruby, sapphire, tourmaline, aquamarine and garnets.

The mining activities attract many foreign buyers from different countries, who come in the country to purchase these minerals from artisanal and small-scale miners and other gem dealers. The most intriguing thing is that these buyers fly in, fly out and come back again and again which means that they make a lot of profit with our country’s stones. The opposite is true for the artisanal miner, who toils day-in day-out in very hostile environments to produce these precious stones because they are taken advantage of, hence they live below the poverty line on less than a dollar a day.

Thomas and his brother Musaiwale are some of the many small-scale miners who have experienced this ordeal. Instead of them being rich guys, they are still immersed deep in the yoke of poverty. These two brothers have been mining for over 25 years now and they have produced a sizable quantity of stones in their lives.

One day on a Tuesday in 1998, Thomas and his brother left as usual early in the morning for the mine expecting to hit a jackpot, and never did they know that it was their day to say bye to poverty. Around 10 am, they landed themselves into a big pocket of aquamarine which they estimate to be around 300 kilograms. They could not believe what had just happened and their faces were filled with joy and happiness knowing that their lives will change forever. The pocket produced big pieces of top quality.

The news about their find spread like wildfire and the two brothers were the talk of the town. Within a few hours, their village was overwhelmed with an influx of people both locals and foreigners to buy the stones. The two brothers were very excited as they were about to kiss good bye to their old miserable life. The guys were under pressure due to their lack of experience in selling stones, as such they lost out. Out of the 300kg they only managed to make 180,000 kwacha (about $5000 as of 1998). Some of the stones they exchanged with two bicycles. Their chance to be millionaires was blown away and poverty still clings to them.

Thomas and Musaiwale are still mining hoping to replicate the luck they had before. As the saying goes “in everything don’t lose hope” so they work hard in their mine believing that soon they will make history again.

There are so many artisanal and small-scale miners who make lots of money only to be poor again because they eat their money uselessly as if there is tomorrow. The major challenge with many miners is that they don’t have a savings and reinvestment culture instead they drink alcohol a lot, divorce their wives and have multiple girlfriends. As a result, all the money disappears and they go back mining hoping to hit a jackpot again within the shortest period of time as if it were them who buried the stones in the ground forgetting that nature did.

Most of the miners are illiterate and they have little knowledge about the business. Instead of involving people who have the skill and good marketing skills they proceed to do business on their own. This problem costs them dearly because they don’t know how to negotiate with the buyers to get good deals as a result they lose out greatly.

There are hundreds of people out there who have gone through what Thomas and his brother Musaiwale went through because they were taken advantage of, due to their ignorance and inferiority complex.

It is high time that the artisanal and small-scale miners and the country start to benefit from this business. Therefore there is need for the relevant stakeholders such as the Gemstone Association of Malawi (GAM), civil society and the government to intervene to break this vicious cycle by civic educating the miners on how to sell their stones and manage their finances. There is also a need to open up gem marketing centers in some areas of the country where the miners can be assisted by experts and sale their stones at a profit.

Images: Thomas and Musaiwale at work 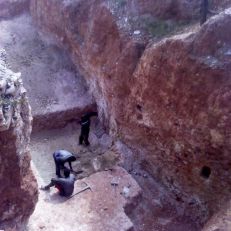 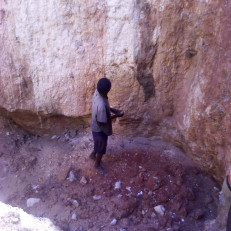 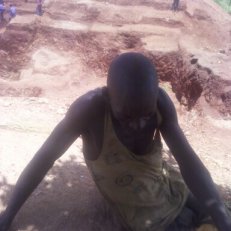