The current administration continues to review five of Malawi’s six oil exploration licences. This has taken over a year, as we reported in November 2015. Since then, the Principal Secretary of the Ministry of Natural Resources, Energy and Mining has announced that “oil, gas exploration [is] set to start in Lake Malawi“.

Three of these licences have been awarded across Lake Malawi and some overlap with the World Heritage Site – Lake Malawi National Park. In response to the awarding of licences, the United Nations Educational, Scientific and Cultural Organisation (UNESCO) initiated a reactive monitoring visit in March and April 2014, conducted by the World Heritage Centre and the International Union for Conservation of Nature. This was followed by a request for Malawi to cancel the exploration licences in the park. This request was made by the World Heritage Committee at its 38th Session in 2014. It reads in part,

Reiterates its concern over oil exploration activities throughout the lake, noting that an accidental spill would pose a potentially severe risk to the integrity of the entire lake ecosystem including the aquatic zone and shoreline of the property

Notes that an Environmental and Social Impact Assessment (ESIA) for oil exploration in the northern part of the lake is being carried out, and requests the State Party to ensure that this ESIA includes a specific assessment of potential impacts of oil exploration and subsequent exploitation on the Outstanding Universal Value (OUV) of the property, in conformity with IUCN’s World Heritage Advice Note on Environmental Assessment;

Urges the State Party to cancel the oil exploitation permit which overlaps with the property and reiterates its positionthat oil, gas and mineral exploration and exploitation are incompatible with World Heritage status;

Calls on Surestream [since Hamra has entered a joint operating and farm out agreement to aquire 51%] and RAKGAS, who have been awarded oil exploration concessions on the lake, to make a commitment to not exploit nor explore for oil or gas in World Heritage properties

The Government of Malawi was given until 1 December 2015 to respond, but has since asked for an extension. The letter (3 pages) is replicated below (click on image to view): 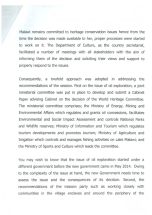 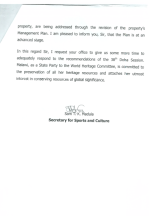 This has provoked public debate on whether or not Malawi should allow oil exploration and production in Lake Malawi. The jury is out – with two civil society activists in particular raising their voices. Godfrey Mfiti is arguing strongly against oil exploration (see his December  presentation here and “Mfiti calls on govt to withdraw oil drilling in Lake Malawi National Park” and “Activist calls for ‘radical resistance’ to oil drilling in Lake Malawi” in Nyasa Times).

On the other hand, Undule Mwakasungula, seemingly supported by “Karonga, Chitipa chiefs [who] endorse oil exploration” (Daily Times, 21 December 2015) has urged government to speed up the review as the community stands to benefit from oil and gas development, or so he argues.

While the matter is discussed within Malawi’s boundaries, a dispute is ongoing between Malawi and Tanzania over the Lake’s boundaries and it still remains unclear when the mediation team of former heads of state, led by Joaquim Chissano, will deliver their decision. Today’s Daily Times reported “Lake Malawi dispute mediators yet to call for meeting“.