The piece “Wealth creation through economic diversification” featured below was initially published in Malawi’s Mining & Trade Review Issue Number 32 that is circulating this December 2015.

Malawi’s economic development path, since independence in 1964, has been through focus on agriculture and agro processing. Sectors such as mining faced negative propaganda by the political leadership up to 2004.  Structural Adjustment Programs, between 1980 and 1994 did not produce intended economic growth but slowed the progress made between 1964 1nd 1979. An open economy regime and export promotion brought its own challenges including decline in manufacturing, heavy domestic borrowing and high interest rates that made difficult for the private sector to access loans for modernisation and expansion.

The paper tries to analyse Malawi’s path to wealth creation and offers recommendations for change in economic planning and development.

Wealth Creation can be described as developing revenue streams that are under the creator’s control.  A nation’s wealth creation evolves fromPrimary Industry to Tertiary Industry through Secondary Industry. Primary Industry is characterised by agriculture and extractive activities. Secondary Industry involves value addition of commodities arising from primary industry.  This sector is characterised by manufacturing and/or diversification.  Once the secondary industry is established it encourages high mass consumption that promotes international trade and innovation leading to knowledge based industries.

Malawi, Mozambique and Ghana can arguably be placed under primary industry scenario while South Africa, China and Brazil are placed under secondary industry transformation.  German, United States and Singapore are under tertiary industry that is characterised by international trade, innovation and knowledge based growth.

This paper tries to analyse the historical perspective of Malawi’s efforts in wealth creation.

Malawi’s trade policy actions and development plans, since 1964, have brought mixed results in wealth creation and diversification of the economy.  Three periods of policy changes have been noted as follows:

These years saw a period of Structural Adjustment Program (SAP) and export promotion through price liberalisation, currency devaluation and restructuring of government businesses or State Owned Enterprises (SOE). Small holder farmers were able to grow special crops after the repeal of the Special Crops Act and this led to over production, reduction in quality of crops and fall of commodity prices.  It can be argued that this initiative was good for wealth distribution at community level but had a negative impact on wealth creation for the nation.

One of the SOEs that was abolished was Mining Investment and Development Corporation (MIDCOR).  This was incorporated with the aim of   spearheading Mineral Development in Malawi.  One of the projects that can be attributed to this SOE is the mining of coal at Kaziwiziwi and Mchenga after civil war blocked transport infrastructure into Malawi.  The Corporation undertook also feasibility studies for bauxite mining and high grade lime production at Malowa hill east of Golomoti.  These projects were meant to support sugar and uranium ore processing, an important component of wealth creation through import substitution and export of alumina/aluminium. Its abolition led to death of mining in Malawi.  One is left wondering also whether Structural Adjustment Program was a success story since privatisation of SOEs led to slow growth of manufacturing if not death of industrialisation in agro processing in Malawi.  SAP affected ADMARC Holdings Limited, Malawi Development Corporation and Press Corporation Limited. Individuals and Companies bought SOE manufacturing arms and turned them into warehouses.

This period to date has seen efforts to establish open economy regime and export promotion.  This has promoted non-strategic trade and non-protectionist policies without first modernising what was left of Malawi’s manufacturing industry to promote competitive level field with cheap imports.  Excessive government borrowing has led to real interest rates increasing at the expense industrial investment that could not borrow from banks due to high interest rates.  This has damaged growth of the manufacturing sector.  This situation is being made worse due to floatation of the Malawi Kwacha, uncontrolled currency devaluation leading to market instability and poor administration of the taxation regime.  Instead of widening tax base, we see intensifying of tax collection and deliberate misinterpretation of administrative policies of taxation.

The mining sector has equally been affected due to high capital and technological requirement.  The damaging of the local manufacturing industry means that the mining sector will take time to promote local content such as supporting goods and services made locally.

The period under review (1964 to 2015) has seen policies and development plans that promoted the primary industry for export of raw materials e.g. tobacco and other crops without proper value addition.  There has been no proper diversification of the economy through mining and modernisation of industries.  Government has given much emphasis on social development rather than on support to industrial growth.  This is evidenced by more allocation of budget to social development than to electricity and transport infrastructure to stimulate industrialisation.

Increased industrialisation will increase government revenue base through employment effects and taxes.  This is only possible if government starts with industrial subsidies that support import substitution and certain level of employment.  Government should support goods and services that are linked with public goods e.g. infrastructure and merit goods such as health and education to improve labour productivity.  There is need to graduate from short term political gain projects such as subsidies for consumption e.g. in subsistence farming to commercial farming and promoting vocational training in areas of automation, electrical, fabrication and general fitting.  This training is crucial for supporting a vibrant mining industry.

The country will only progress to economic prosperity if a “one term” president comes in and sets an agenda for economic take off from primary industry to tertiary industry.

Wealth creation for Malawi failed due to SAP. It failed to create growth in the manufacturing sector.  This is manifested by the increase in imports that have exposed poor manufacturing base.  It is documented that pre-SAP manufacturing growth was 6% while annual growth during SAP was 4% (Munthali, 2004).  There is no doubt that current manufacturing growth is at around 2%.  Let it be emphasized that inflow of foreign aid distorts economic growth and is therefore a disincentive for wealth creation.  This is the time to assess our economists if they fish out our floating economy before it sinks. 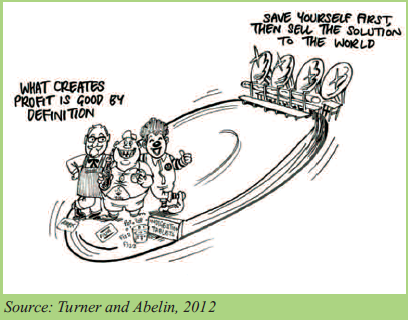 The path to economic diversification is enshrined in the Vision 2020 (1998) and Malawi Economic Growth Strategy I and II (2007 and 2012) .  These documents have failed to effectively guide wealth creation because of populist attitude of our political governments in implementing their manifesto promises instead of medium to long term programs that can create wealth for the nation.  Subsidy programs to vulnerable groups are not a path to wealth creation. Programs that support or stimulate economic development in terms of infrastructure, health and technical education can go a long way towards supporting industrialisation.

Our national budget and support programs mainly support social development in areas whose investments do not bring any tangible returns that bring sustainable development.  It’s now time to budget for programs that support infrastructure growth, health and technical education, mining and commercial agriculture.  These programs will have ability to support access markets, agro processing and relevant manufacturing to support mining and import https://mininginmalawi.com/files/2015/12/24/substitution.  more jobs and technical; innovations will be created and will generate revenue for government through taxes and import substitution and improve export base.

Domestic borrowing should be a way of funding technical education and mining for import substitution and energy development.  The proposed coal fired thermal plant should be able to support coal development in Malawi as opposed to rely wholly from Mozambique coal.  If poorly planned it will be another forex drainer that will kill also the coal mining industry in Malawi.

It is important to be politically unpopular in the short to medium term in order to sort out the economic mess in which the country finds itself.  Programs such as National Export Strategy, commercial agriculture (through Greenbelt Initiative), agro processing, mining and technical education should support or complement each other in order to promote wealth creation.  A State Owned Enterprise should be created to spearhead mining of industrial minerals for import substitution and stimulate investment in mining through management of government shareholding and local economic empowerment through   divesture of mature mining, oil and gas projects.