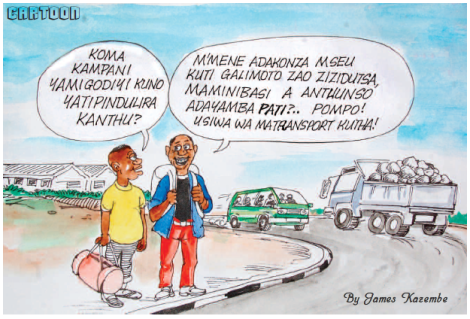 “We want to partner foreign investors in mining ventures”

We are saying that government should come up with deliberate policies that will see the indigenous Malawians participate in mining and other profitable sectors and if government can do it, in three years, there will be a significant change in the way this economy runs.

As things are at the moment, we are spectators in our own country. But in other countries they agree with these mining giants to fairly work with some relevant locals and this system favours a small country which owns the resources but does not have the capacity to extract them on its own.

He explains that between December (2014) and January (2015), he will be in the United States of America where a  series of meetings with potential investors have been arranged and, among the topics to be tabled, is the roadmap for indigenous businesses to partner multinational firms in exploiting fields such as mining for the mutual benefit of the country. Mlombwa also urges government to put in place deliberate measures to ensure that the economy is in good shapesingling out exorbitant interest rates as barring locals from investing in profitable ventures such as mining.

No one can significantly invest in sectors such as mining with interest rates hovering at 44%. Mining is a long-term project and if you need two or more years before you start making profits, then the current interest rate regime is not favouring the sector.

For sure, this has left locals in subsistence mining activities which are widely done at meager capacities, leaving foreign and bigger companies such as Paladin Energy and Globe Metals and Mining leading the sector at large scale.

Business mogul Jimmy Korea Mpatsa concurs with Mlombwa on the need for joint ventures between local and foreign investors to develop mining prospects saying mining is a sector that requires huge investment -which most of the locals can hardly afford overnight.

If you talk about mining, yes mining is another potential sector the country has. But I would tell you that mining is long-term and it needs huge investment and local investors independently, cannot afford.

Between 2006 and 2010, Malawi’s minerals industry, on average contributed 1.5% to the national economy, and the sector was expected to contribute 2.8 % to the economy between 2011 and this year, according to the World Bank.

Results of this year’s Airborne Geophyisical Survey executed with funding from the World Bank and European Union confirm existence of a number of anomalies for high value minerals such as gold, diamond, uranium and platinum group metals.

Malawi is currently mining coal and limestone for cement production at a relatively large scale following the   mothballing of Paladin Africa’s Kayelekera Uranium Mine, which is so far the country’s largest mining investment.

There is also gemstone mining taking place in all the three regions of the country but despite the existence of precious gemstones, which can outdo diamonds on the market if well processed, the country is failing to substantially benefit from the mining of gemstones allegedly due to smuggling of the resources.

The country is also failing to register substantial gains from gold panning by small scale miners taking place in the Lisungwe Valley area due to the same problem of smuggling.