Godfrey Mfiti gave a talk last Thursday (3 December 2015) to the Wildlife and Environmental Society of Malawi in Lilongwe on “Lake Malawi Under Threat: Is Oil Drilling in Lake Malawi Sustainable?”. It may be no coincidence given Mfiti’s work and engagement that today The Nation has reported that the Government of Malawi has not made a decision about exploration in Lake Malawi National Park in response to the UNESCO’s report on the Park.

UNESCO conducted a monitoring visit in March and April 2014 and recommended, among other things, that the Government of Malawi prohibit oil exploration in the Park and around the buffer zone as well as expand the area that is part of the Park. The Government was asked to respond by 1 December 2015 (over 1.5 years later) but has not yet made a decision. Full information about the UNESCO monitoring visit is available here with links to the report.

On the other hand, according to The Nation, Ben Botolo, Principal Secretary for the Ministry of Natural Resources, Energy and Mining could not comment because his ministry is yet to see the (2014) UNESCO report and government’s response. 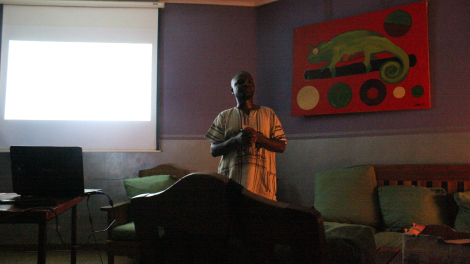 Godfrey Mfiti, Director of the Institute for Sustainable Development, gave a talk on Lake Malawi and oil exploration, 3 December 2015

Mfiti is the Director of the Institute of Sustainable Development, based in Blantyre, and was recently selected to manage the Africa Great Lakes Conservation Network under the Abertine Rift Conservation Society, and one of his tasks is to monitor the Lake Malawi National Park. During the talk last week, he explained that Lake Malawi is of uncounted economic importance given that it is a source of water, site of significant tourism, a unique aquatic and ecological environment and supports the livelihoods of two million people. According to Mfiti, Malawi did not follow the correct procedures in the issuance of licences and he made the following recommendations: 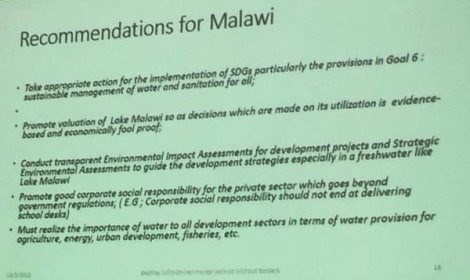 Not everyone seems to be opposed to oil and gas exploration reported both The Nation (Communities want oil search results) and The Daily Times (Karonga community urges government to expedite oil deals) over the weekend. According to Vyalema Kaluluma reporting for The Daily Times,

Secretary of Karonga Community Development Trust, Peter Manda and former activist Undule Mwakasungula said the oil and gas exploration projects would go a long way in transforming the lives of people of Karonga and the country as a whole.

Manda said there were misunderstandings with the deals at first as most people in the district thought that oil exploration would affect marine life in Lake Malawi.

“The community now has been sensitised that the project will not affect fish species as speculated. We [people of Karonga] welcome the oil and gas exploration with the hope that it will boost businesses in the district.

“I therefore ask government to fast track issuing of the licences,” said Manda.

Mwakasungula described oil exploration as a viable project for the nation.

Mwakasungula organised the meeting in Karonga, according to The Nation‘s reporting

to plan its action when the licences ban has been lifted, saying he would want ordinary people to benefit from the natural resources to avoid what happened with Kayerekera mine.

“We should not exaggerate the dangers of oil mining. So many countries are doing it, why not Malawi? Sooner or later, oil will be mined, we just have to be prepared,” he said.

The licences for all the exploration blocks awarded across Lake Malawi are currently suspended pending a Governmental review. Read more about that here. 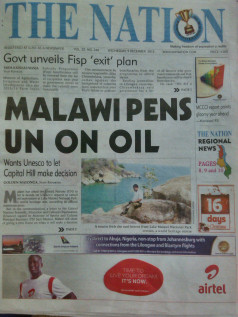 Malawi has asked the United Nations (UN) to let it decide on Unesco’s request to cancel oil exploration at Lake Malawi National Park, a world heritage site, according to official communication.

But in the communication, a letter to the United Nations Scientific, Education and Cultural Organisation (Unesco) signed by Ministry of Sports and Culture Principal Secretary (PS) Sam Madula, Malawi fell short of giving a time frame on when it will make a decision on the matter.

Oil exploration on Lake Malawi is currently suspended, but Unesco is concerned that Rak Gas Limited was also granted an oil exploration exercise on the world heritage site.

“Second, the recommendations of the mission party such as working closely with communities in the village enclaves in and around the periphery of the property are being addressed through the revision of the property’s management plan.”

He assured the UN agency of Malawi’s commitment to heritage conservation issues and that the country is working on several recommendations from the Doha meeting on the matter.

Ministry of Natural Resources, Energy and Mining PS Ben Botolo on Tuesday said he could not comment on the matter as his ministry is yet to see the Unesco report and government’s response.

Reacting to the development, environmental activist Godfrey Mfiti asked Malawi to withdraw its interest to explore oil on the heritage site.

He said: “It is high time that the Government of Malawi must come out in the open and withdraw the whole idea of exploiting Lake Malawi unsustainably. The current world growth path demands sustainable economic development approaches. It is unfortunate that oil drilling in Lake Malawi is undermining the possible permanent environmental and public health impacts.”

But another activist, Undule Mwakasungula, urged caution on the matter, saying government needs to weigh the economic benefits of any of the choices it can make on the matter.

He said: “Government cannot just cancel licences because of Unesco recommendations. The nation must weigh the benefits from oil and keeping the so called recognised heritage. If oil with proper management will bring economic turnaround for the nation and change lives of the people why not go for it?

Over the weekend, some communities in Karonga and Nkhata Bay asked government to speed up its decision on oil exploration licenses that Capital Hill suspended last November to review Production Sharing Agreements (PSAs), saying they believe oil discovery would be of economic benefit to their communities.

The suspension of oil and gas exploration in November 2014, initially for a month, have now swallowed more than a year.

Rak Gas—owned by the Government of Ras Al Khaimah, one of the emirates of the United Arab Emirates (UAE)—holds Blocks Four and Five it won after an international bidding participation. It has since carried out Full Tensor Gravity Gradiometry (FTG).

Hamra—a Cayman Island origin private company—bought 51 percent into Blocks Two and Three from Surestream and entered into a deed of assignment that was duly approved and signed by the ministry. Hamra too has carried out an FTG.

Pacific Oil, which is part of Vega Petroleum Limited—the privately owned oil and gas entity that has oil producing and exploration concessions in Egypt—secured Block Six, also after an international bidding participation while SacOil won Block One.

Both Pacific and SacOil are yet to carry FTGs, but the Vega group member has indicated that it is ready to carry out the exercise once it gets government nod.