The piece “Eye on Malawi’s EITI: Using the EITI for Reform” featured below was initially published in Malawi’s Mining & Trade Review Issue Number 30 that is circulating this October 2015. 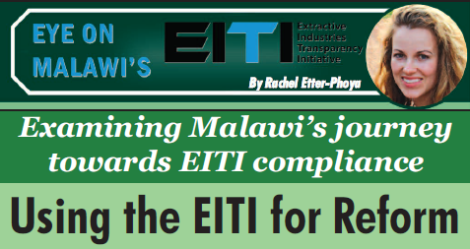 Using the EITI for Reform

This month, the Extractive Industries Transparency Initiative (EITI) Board will meet in Bern, Switzerland, for its 30th board meeting. The Government of Malawi’s application to join the EITI, submitted in July this year, will be on the agenda. Shortly after the meeting, it will be made known whether or not Malawi has been successful in its application to join the initiative to improve transparency and accountability in the extractive industries.

As Malawi awaits the Board’s decision, it is interesting to consider opportunities available through the EITI Standard for impacting governance of the sector. A study recently carried out by the Natural Resources Governance Institute (NRGI June 2015) discusses the way that the compulsory EITI annual reports can tangibly lead to reforms. Recent EITI reports have revealed shortfalls in the ways countries have allocated licences to companies, disclosed politically-affiliated owners of companies, and uncovered significant local revenues that were never disbursed.

Once – and if – Malawi is approved to join the EITI as a candidate country, the National Secretariat will have 18 months to produce the first EITI report under the guidance of the multi-stakeholder group, which is made up of the private sector, civil society and government. The report will cover contextual information about the sector, including the fiscal regime, contractual framework, production, licencing procedures, revenue allocations and expenditures, as well as data on company payments and revenue collected by government from the extractive industries. The EITI Standard, adopted in 2013, ensures that the report is used as a tool to disclose information along the entire extractive industries decision chain.

As is often said, Malawi’s mining sector is in its infancy so the country can learn from the region’s experienced players, and in the same vein, we can take the best practice of the 48 countries which are already part of the EITI, of which five are Southern African Development Community member countries. This was the motivation behind a German government-financed study tour for Malawi’s multi-stakeholder group and National MWEITI secretariat to Zambia’s EITI in June this year.

The aforementioned NRGI study also highlights the following content areas that should be included in the EITI reports in order to ensure reporting feeds into reforms:

Furthermore, Malawi needs to ensure that the EITI and its reports are relevant and timely by linking activities and reports of the multi-stakeholder group to the priorities of the country. For example, Burkina Faso made sure disclosures were related to the public’s interest in employment following a protest at Iam Gold’s Essakane mine over the lack of local employment. The Burkinabe EITI report for 2012 contained employment data for the mining sector which revealed that Iam Gold employed the greatest number of locals in absolute terms and had an above average proportion of local employees at the mine.

As we wait to hear from the EITI Board, the MWEITI National Secretariat and multi-stakeholder group are planning to conduct a scoping study to determine which data, companies and resources should be included in the first report. More on this next time!