The piece “Govt. to curb illegal cement imports” featured below was initially published in Malawi’s Mining & Trade Review Issue Number 29 2015 that is circulating this September 2015.

The publication announced its rebranding this month, moving from the Mining Review to the Mining & Trade Review

The decision to rebrand has come about in response to some of our readers from other economic sectors in addition to mining who want to be incorporated as stakeholders. 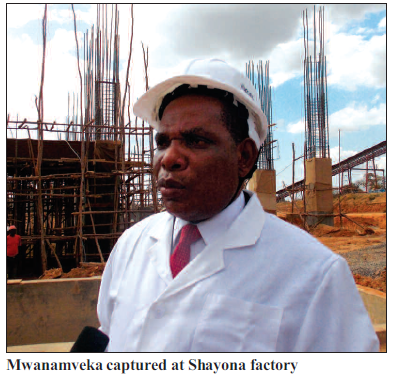 The Ministry of Trade and Industry has said that cement that is being smuggled into the country from neighbouring Zambia, Tanzania and Mozambique is a big threat to the local cement manufacturing industry as it is being sold at lower prices.

Speaking in an interview when he toured Shayona Cement factory in Kasungu, Minister of Trade and Industry Joseph Mwanamveka said traders are selling the smuggled cement at lower prices, which is illegal, because they do not pay import duty.

Smuggled cement is reducing demand for local cement as it is sold at cheaper prices, which is a threat to our local industry. Government will strengthen security at the boarders to create a fair playing ground for our local cement industry,’

The Minister added that local companies, which are remitting huge sums of money in taxes to the Government and investing billions of kwacha in their businesses, cannot thrive with such type of unfair competition posed by the smugglers.

We want people to be buying cement made here in Malawi to promote our local industry and secure jobs for thousands of Malawians working for these companies,

He also said that he is impressed with the heavy machinery being used at the Shayona factory and the quality cement that the company is producing mostly using raw materials sourced locally.

The Minister encouraged other investors to emulate Shayona’s example by investing in more cement plants in order to promote competition in the industry and ensure that prices of cement are affordable to many poor Malawians.

We came here to appreciate and see the challenges they are facing and to see how best Government can assist them so that they can be on course. I am impressed with the great investment and hope other investors will be inspired by this magnificent task,

The Minister applauded the company, which has created 1200 jobs, for blending well with the communities around the factory.

Mwanamveka also said he is impressed with the corporate social responsibility aspect of the project that has seen Shayona constructing school blocks and assisting a local police station and a clinic.

MD for Shayona Cement Corporation, Jitendra Patel, also expressed concern over the influx of smuggled cement saying it is posing unfair competition to his company.

Government should assist us by making sure any trader importing cement pays duty so that there is fair competition on the market,

He also thanked the Government for gravelling the road to the factory which was in bad shape.

Patel disclosed that the company is investing K600 million in corporate social responsibility projects in T/A Wimbe’s area where the factory is located.

The Minister visited the factory and the nearby mine where limestone is extracted for cement production and also Chigumba Primary School where the Company has constructed  additional school blocks.

Shayona Cement Corporations has been operating in the country since 1994, but started production in 1997.