The piece “New law to ensure locals benefit from mining deals: CSOs applaud government for accommodating diverse proposals into bill” featured below was initially published in Malawi’s Mining Review Issue Number 27 2015 that is circulating this July 2015.

The debate that the article refers is available to listen to or for download here.

Government says it is spearheading a process of coming up with a new Mines and Minerals Act that would equally address needs of citizens and investors, ensuring a win-win situation that would prevail with utter fairness, transparency and accountability.

Commissioner for Mines and Minerals, Mr. Charles Kaphwiyo, said this during a national public debate organised by Catholic Commission for Justice and Peace (CCJP) in partnership with Church and Society of Livingstonia Synod, Quadria Muslim Association and Evangelical Association of Malawi with support from Tilitonse Fund as part of national advocacy intervention on social issues.

The commissioner was one of the panellists during the debate held at Crossroads Hotel in Lilongwe on June 15th, 2015 and aired live on Zodiak Broadcasting Radio Station as part of activities under CCJP’s Tonse Tipindule Project that is aimed at strengthening participatory, transparent, accountable and responsive mining governance.

The debate which also involved soliciting views and suggestions from people across the country through live phone calls and the audience present at the event lasted for about an hour.

The main question that the debate tackled was: “Is the current Mines and Minerals Draft Bill responding to the burning issues that Malawians in civil society organisations, faith based organisations and local communities have been raising?”

In response, Mr. Kaphwiyo said government is commitment to providing an impeded room for any sound proposal that would ensure the country come up with a legislation that would act as a legally-binding blueprint to guide operations in the mining sector for the mutual benefit of the communities within the mine area, the nation as whole, as well as the investor.

Let me report here that most of the comments, recommendations and proposals that were previously made during the stakeholders’ consultative workshop were incorporated in the draft bill and those that are being expressed this time around are seriously going to be taken into consideration,

The commissioner urged the public to come forward with proposals relevant to all aspects to do with mining that would cover all shortfalls in order to seal loopholes that permitted unfair or individual self-enriching dealings in the mining sector.

My plea is that let us join hands and come up with a very tight bill that would curb the suspected tendency by some individuals in authority of taking advantage of situations due to laxity of laws,

In his remarks, Hajat said, as the civil society, they presented about 140 proposals and recommendations to the bill drafting team for consideration and so far, they are pleased with the way government is handling the matter.

The Act is aimed at setting a proper policy framework that would guide the fair, transparent and accountable operation of the  mining sector. So we had misgivings as regard some areas, which we noted and we presented our proposals on how we can address them,

Hajat said the Civil Society input mainly focused on the need of ensuring that communities in which mining activities are taking place should sustainably benefit from the investment and there should be no room for abuse of human rights in this respect.

He said, among other issues, they proposed that the bill covers issues to do with compensation in terms of resettlement of people and environmental damage suggesting the inclusion of ‘the polluter pays it all’ principal.

Hajat also advocated for clear stipulation in the bill binding mining companies to shoulder responsibility of managing the post mine closure effects as well as the sustainability of development in the area in the course of mining and after mineral exhaustion.

He commended government for being open on the handling of the bill and accommodating proposals from different stakeholders, which he said would result in a law beneficial to the country and its citizens.

Nonetheless, he said there is a need to consider restructuring the management structure that the bill proposes saying the stages the investor would need to pass through to obtain licences or mineral tenements creates what he termed ‘Byzantine bureaucracy’ which, he was afraid would slow down the process.

On his part, Mr. Malunga advised government to up its game when it comes to providing appropriate information to the concerned communities relating to any proposed mining activity in a particular area.

Government’s quietness on people’s complaints is what is leading to the build-up of suspicion and skewed assumptions. As a result, public trust in government on the way it handles mining deals is being lost,

He said providing clear and accurate information to the public through appropriate channels such as using traditional leaders and experts to conduct general public sensitisation would clear all the misconceptions that create unnecessary animosity toward investors.

There is need to involve communities on the onset so that they should embrace the investment as an initiative, which will benefit them; the nation, not few individuals, as some are made to believe, 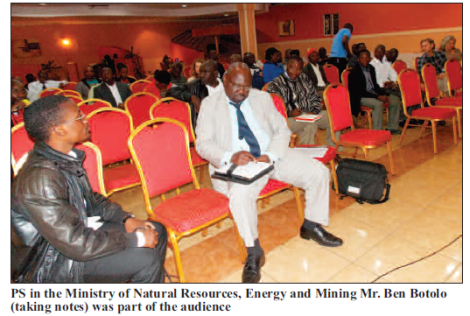