The piece “Minerals sector to benefit from transport, construction reforms” featured below was initially published in Malawi’s Mining Review Issue Number 27 2015 that is circulating this July 2015.

The mining sector in Malawi stands to benefit from the on-going public sector reforms after government simultaneously launched National Transport and National Construction Industry Policies that would act as guiding-blueprints of operations in these two key sectors.

The double launch was presided over by the Minister of Transport and Public Works, Honourable Francis Kasaila MP, at an event which took place at Crossroads Hotel in the country’s Capital City, Lilongwe.

In his address, the minister said both policies would work collaboratively, driving the mainstreaming and sanitisation of the transport and construction industries, processes that fall under public sector reform programs the government is implementing.

Hon. Kasaila acknowledged tremendous achievements that both sectors; transport and construction, have attained over the years but equally noted  a number of challenges that have impeded the growth of these two industries, which the new policies want to address.

The minister said the goal of the Transport Policy which was drawn up in 1999, but was reviewed twice in 2004 and 2012, is to ensure the provision of a coordinated and efficient transport infrastructure that fosters a safe and competitive operation of viable, affordable and sustainable transport services.

He observed that transport costs in Malawi remain amongst the highest within the Southern Africa Development Community (SADC) region, a state of affair which, he said compromises the competitive edge for Malawian products on the international market and increases the cost of imports.

Our last assessment showed that the transport costs share of landed imports stood at 56% and 30% for imports and the figures are estimated to continue growing at 7% to 8% annually, providing the main challenge to the transport sector,

But the launched policy, he said, guides towards the reduction of such exorbitant transport costs to regionally competitive levels, while increasing the sector’s contribution to Gross Domestic Product (GDP).

The policy promotes a multi-modal approach, maintenance-minded funding of the road network and private sector involvement in the provision of coordinated safe, reliable, efficient, cost-effective and affordable transport systems and services,

The policy which covers all modes of transport namely; road, rail, air and marine, identifies priority areas of focus such as transport infrastructure, transport service provision, international corridors, private sector participation, among others.

Expectations after the policy implementation include reduced travel times and costs of persons and goods, improved reliability, high levels of service and efficiency, improved intermodal competition, as well as enhanced access to local and international markets by producers.

The effectiveness of this policy is poised to contribute directly to the growth of the extractive industry by easing transportation woes that the existing players are facing, as well as attracting more investors to the sector that has been envisaged to have huge economic potential.

Hon. Kasaila noted that low capacity of local contractors and consultants, lack of supportive mechanisms in terms of financial credit facilities for local firms as well as weak regulatory framework had remained some of the prohibiting hurdles facing the local construction industry.

But, he said, the implementation of Malawi’s first ever Construction Policy would see to it that most of the stumbling blocks are dealt with.

The minister said that the policy will provide a platform for the construction industry to overcome challenges and embrace existing opportunities in a quest to effectively develop, maintain and manage physical infrastructure.

He further said that the policy provides for government intervention in terms of building the capacity of local firms and local construction players so that they should have the muscle to compete on international market as well as take part in local huge construction projects.

Among priority areas that are identified in the National Construction Policy are improvement and development of the regulation of the industry and improvement of standard, quality assurance and increased productivity.

Furthermore, the policy sets stage for the enhancement of regional and international cooperation, good corporate governance as well as the strengthening of the institutional framework, just to say the least.

Speaking on behalf of EU, Ambassador Gerrmann noted the significance of launching what he termed two key policies for the transport and more widely the construction sectors.

He said as a long time development partner, EU was aware of the key role that the transport and construction sectors play in the social economic development of Malawi.

Transport and infrastructure development are facilitators of economic growth and poverty reduction, which is a key objective in the Malawi Growth and Development Strategy (MGDS) II hence the development of policies to guide these industries is not only commendable but necessary as well, considering many well-known challenges that are there,

He then announced that his organisation is preparing to ‘concretely’ contribute a 33 million Euros for capacity development in the construction industry under a programme that will start in early 2016 focusing on technical and vocational training.

The EU diplomat highlighted one notable similarity between the two policies, saying both will provide an enabling environment for private sector participation, which, he said, is a key step in ensuring the exploitation of the comparative advantages of the public and private sectors in addressing identified infrastructure development needs and challenges.

In an interview with Mining Review after the launch of the two policies, NCIC C.E.O Phiri could not hide her excitement, saying the new construction policy will largely benefit local contractors through provision of capital and other relevant incentives.

We’re are really excited as an industry as we now believe that the full implementation of this first ever National Construction Policy will address a myriad of challenges we have been facing, among them, lack of capital and necessary equipment to bid for huge projects as well as lack of technical knowledge,

Phiri said with the policy in place, NCIC will soon embark on a project to train its members in many areas of importance, as well as making them understand what the whole policy entails.

For instance, we will train construction companies in areas of financial management, human resource management and the overall company management so that we create a crop of contractors who can run business in a professional manner for the benefit of the companies, the society and the country as whole, 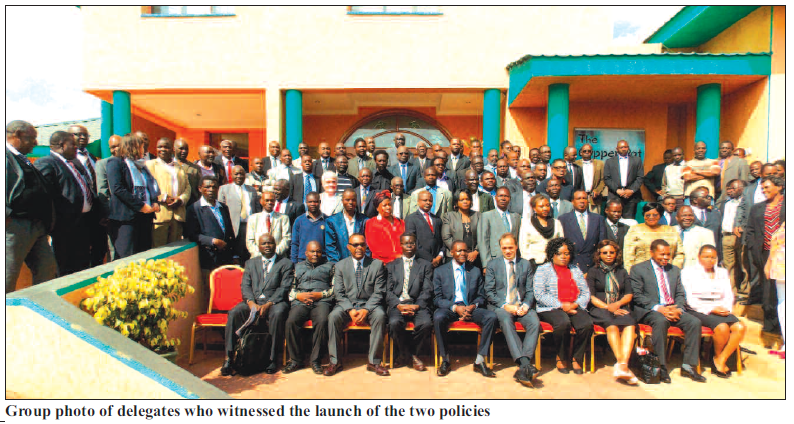