Oil and Gas potential in Malawi

Oil and gas exploration in Malawi is a new phenomenon. Six exploration blocks have been delineated and exploration licences issued.  There is need to understand the process of exploration, development and revenue structure for government.  Challenges of finding economic deposits exist due to the nature of geotechnical environment. Revenue transparency and utilisation will play a big role to avoid resource curse.

Oil and gas are derivatives of transformation of plant and animal tissue into kerogen within shale, marl carbonate rocks. Accumulations of these organic substances between a depth of 2 to 6 km and at a temperature of 60 Celsius to 160 Celsius forms petroleum (or oil and gas).  It is important to note that algal and herbaceous kerogen are the best source of oil while woody kerogen is best source of gas.  These migrate through porous and permeable rocks, such as sandstone and limestone, to a confined place or trap with a cap of impermeable layer such as shale or salt.  These traps are structurally controlled and exist in form of fault type or anticline type. Oil and gas are light and buoyant usually settling in form of gas, oil and water in that order.

In Malawi these traps can be found in thick sedimentary formations such as in the northern and southern Karroo rocks or under Lake Malawi.  This is why the country is divided into six blocks for oil and gas (hydrocarbon) exploration.

The basic tools for exploration for hydrocarbons are knowledge of earth formation, lithology and structure.  The main methods used to find hydrocarbons are geophysical, remote sensing and wild catting.  Geophysical methods usually used are seismic and gravity surveys while use of remote sensing is observation and interpretation of satellite and aerial images.  Large scale features of sub surface geology are eventually detected.

Remote sensing is an art and science of seeing and interpreting objects, structures. These help mitigate against higher risks of conducting expensive investigation before oil and gas potential is determined. 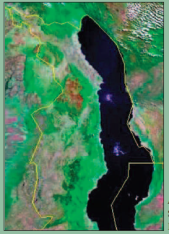 Remote sensing helps in identification of variations in geological properties, mineral and vegetation distribution using satellite imagery and aerial photos.  Structures such as folds, lineaments and deposition structures are identified at local and regional level, and augment information required for interpretation of petroleum geology.

Wildcat techniques have been used to locate well drilling using “educated guess”. Some largest US discoveries were made this way without economic analysis. This is very risky because drilling a well can cost over 100 million dollars. Wildcat techniques are now being practiced through contractual arrangement or obligation.

Potential for Oil Discovery in Malawi

The potential for oil and gas discovery in Malawi is very high especially in Blocks 2 (Karonga), 3 (Nkhata Bay – Nkhota Kota) and 6 (Chikwawa – Nsanje).  Blocks 1 (Chitipa) and 5 (Phalombe) have relatively shallow sediments of up to about 3700 metres.  The depth provides conducive environment for hydrocarbon formation but there is need to study volcanicity and tectonic activities that could have possibly released the oil and gas. Similary the effect of Stormberg volcanicity needs to be analysed in Chikwawa.

It is a fact that most petroleum resources are owned by host country. Land ownership can play a role in negotiating oil development especially in countries where government issues exploration and extraction licences while the surface right belongs to another individual. Licences are normally awarded in competitive bidding on the basis of available finance, technical competence, environmental mitigation, extent of work program and corporate social responsibility. Development Agreements or Production Sharing Agreements (PSA) are best dealt with when there is a discovery of an economic deposit.

Development expenditure is offset against production revenue. Usually production sharing agreements are signed on a 60 to 40 percent sharing of oil produced.

Another arrangement is for payment of tax and royalty on oil produced. Profit tax is also applied or can be used to offset development expenses. Bonuses and ground rents may be payable to government. A word of caution: William Devanter once said “The power to tax carries with it the power to embarrass and destroy”. In other words taxation to investors requires fairness and the realisation that it can discourage further investment.

Where host government has been fully responsible for exploration, a service contract can be signed for an oil company to act as a contractor for the host government, to be paid to produce oil and gas.

Oil and gas exploration in Malawi is a recent effort.  There is need to understand practices in the global oil industry in order to build confidence to the citizens and avoid resource curse. Issues of transparency in negotiating contracts and accounting for revenue in a transparent manner will bring confidence and trust to the participating government.  It is pleasing to note that this is happening at a time when government is preparing to subscribe to Extractive Industry Transparency Initiative (EITI).