The piece “Eye on Malawi’s EITI: Malawi’s Multi-Stakeholder Group Meets for the First Time” featured below was initially published in Malawi’s Mining Review Issue Number 25, May 2015.

The Government of Malawi intends to submit its application to join the Extractive Industries Transparency Initiative (EITI) this June. The new Minister of Natural Resources, Energy and Mining, Hon. Bright Msaka SC, confirmed, once again, Malawi’s intentions to join the EITI. This step is being taken in order to promote greater accountability in the sector and fact-based dialogue on how Malawi can best use resources and revenue. Msaka made these remarks during the consultation workshop on the draft Mines and Minerals Bill in mid-April. Msaka also noted that transparency for the disclosure of necessary information for the EITI, such as data on company payments to government, is provided for in the draft Bill.

On 30 and 31 March, after the April edition of the Mining Review went to press, the multi-stakeholder group that has been charged with the implementation of the EITI in Malawi, met to draft the work plan for the EITI process. This is one of the required documents for Malawi to sign up to the EITI and be awarded EITI candidacy status.

The three constituency groups in the multi-stakeholder group – government, industry and civil society – along with Lutz Neumann, a consultant hired by GIZ (Deutsche Gesellschaft für Internationale Zusammenarbeit), met in Salima to discuss the terms of reference for the grouping and the work plan. The Ministry of Finance, Economic Planning and Development’s Revenue Policy Division is currently operating as the EITI National Secretariat so was also present at the meeting along with GIZ representatives from the programme Strengthening Public Financial and Economic Management. The chair of the meeting, the Chief Economist from the Revenue Policy Division, George Harawa, explained that “This is a very, very important meeting as part of the multi-stakeholder group’s work as we move the EITI process forward”.

The multi-stakeholder group deliberated the goals for the EITI in Malawi. At its heart, the EITI promotes transparency and disclosure of company payments to government and government receipts of these payments in order to foster greater public debate on the use of natural resource wealth. The multi-stakeholder group hopes that the EITI in Malawi will also strengthen partnerships and trust between government, companies and the public to attract quality investments that can be used to increase the revenue base and socio-economic benefits from the extractive industries.

Present at the meeting were multi-stakeholder group representatives from the Ministry of Finance, Economic Planning and Development, the Ministry of Natural Resources, Energy and Mining, the Reserve Bank of Malawi, the National Audit Office, Globe Metals & Mining, Mkango Resources, Paladin, ActionAid Malawi, the Catholic Commission for Justice and Peace, Citizens for Justice, and the Foundation for Community Support Services. Only Bwanje Cement sent their apologies. 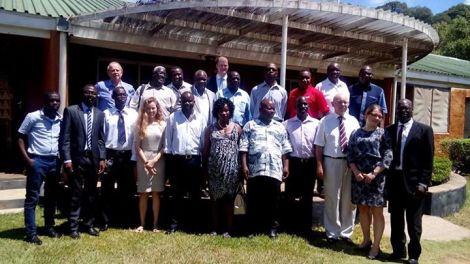 Thanks to Success Sikwese (Catholic Commission for Justice and Peace) for sharing the photo.