The Technical File “Economic potential of pegmatites in Malawi” featured below was initially published in Malawi’s Mining Review Issue Number 25, May 2015.

Malawi is underlain by basement metamorphic rocks intruded mainly by basic, granitic and syenitic rocks and overlain by sedimentary rocks. Most of these pegmatites are granitic with abundant quartz, feldspar and mica.

So far, valuable minerals such as beryl, tourmaline, zircon and garnets have been observed. There exist potential for discovery of other rare and industrial minerals. 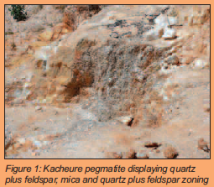 Pegmatites are course grained granitic rocks that occur as dykes and form narrow ridges or small hills. Most pegmatites contain abundant quartz, feldspar and mica. It is important to note that there exist other pegmatites derived from plutonic rocks such as gabbro and syenite.

They contain important accessory minerals in form of gemstones or rare minerals.

These accessory and valuable minerals include beryl, tourmaline, spodumene, garnet and topaz. Industrial minerals from these rocks include quartz and mica while rare minerals that can also be formed in them include columbite and tantalite.

This paper tries to inform prospectors that they will definitely encounter these minerals and tries to describe their physical and chemical characteristics.

Gemmstones obtain their colour from their own makeup (idiochromatic) or from trace elements (impurities) such as chromium, lithium, copper, iron, manganese and vanadium giving them an allochromatic characteristic. Natural dispersion of light (pseudochromatic) through surface reflection can also give colour to gemstones.

Examples of allochromatic characteristics or colour by impurities is given below;

Amazonite is an easily fracturing green feldspar that can be cut and polished to be used as gemstone.  Its colour is believed to be coming from lead and water.

This mineral is common at Kabumba in Mzimba and Usisya in Nkhata Bay hosted by granitic rocks.

Apatite is a calcium phosphate rock containing fluorine, chlorine and vanadium among other elements that substitute for calcium. Its colour varies from green to blue and can be mistaken for aquamarine and tourmaline. The immediate differentiation is that it is softer.

Gem apatite has been mined in Nsanje around Tengani and Lulwe mission.

Beryl is a rare mineral that is rich in beryllium and occurs in veins and cavities associated with hydrothermal activity within pegmatites.  These minerals are in veins that penetrate quartz rocks in the order of mica, feldspar and beryl in quartz.

Beryl which is non gem quality is a source of beryllium and is sold as “trash”. The gem quality has usually uniform colour, is transparent and with less or no cracks for easy cutting and polishing.

Garnet is found in pegmatites as an accessory mineral. The common garnet in Malawi pegmatite is red garnet called almandine and orange garnet called spessartine. While the author was undertaking limestone exploration on Malowa hill (Golomoti) in 1996, he found green garnet in a pegmatite on eastern summit. 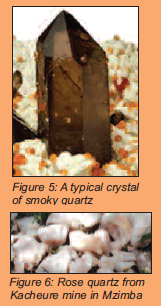 Quartz is a hard, durable and common mineral that forms a massive principle component of a pegmatite. Gem varieties include amethyst, smoky quartz and rose quartz. These are grouped as semi-precious stones.

Smoky quartz derives its colour through natural radiation emitted from the surrounding rock.  This radiation activates colour centers around aluminum impurities within the crystalline quartz. These gems can be processed and used in rings, cufflinks, pendants, necklaces, earrings, and brooches for people who like the yellowish brown to brown color.

The color of rose quartz is attributed to microscopic inclusions of a pink variety of the mineral dumortierite. Rose quartz isusually cut into cabochons and beads.

Amethyst is common in Mzimba and Chitipa.  Smoky quartz is collected from pegmatite cavities on Mulanje Mountain, Zomba Mountain and Nyika plateau where they are sold as mineral specimens. Rose quartz occurs as pockets within massive white quartz in Mzimba.

Tourmaline is a multi-coloured gem falling within semi-precious stones. It is crystalline boron silicate mineral compounded with elements such as aluminium, iron, magnesium, sodium, lithium, or potassium.

Pegmatite hosts many rare minerals. In Malawi a few minerals have been observed so far. These contain beryllium, columbium, niobium, tantalum and titanium, tungsten and many other elements. In most cases these have included columbo-tantalite, pyrochlore, beryl, rutile and ilmenite. If the mine contains nice crystals, the minerals are often more valuable as mineral specimens and faceted or tumbled. Good sources of these minerals are Mzimba, Senzani, Neno, Thambani and Tengani areas.

Pegmatite can be a source of industrial minerals such as;

Malawi is country that requires a serious business minded leadership if we are to unveil earth’s treasure.  A systematic mineral exploration program is required grouped according to geological prospectivity as well as taking into account the financial and human resource allocation. Pegmatites prospecting and support to small scale miners will bring order and sustainable mining that will generate mineral wealth and sustainable environmental management and poverty alleviation.