The piece “Destination Malawi: Guide for Investors” featured below was initially published in Malawi’s Mining Review Issue Number 22 2015 that is circulating this February 2015.

The full edition can be read here: Mining Review No. 22 February 2015.

“Malawi offers great opportunities for enterprising investors”, observed Mining Review’s Publishing Editor, Marcel Chimwala, in the publication’s editorial last month. Following on from this editorial, our mining correspondent has investigated the process for investors in Malawi with a focus on the mining sector.

Mining is the country’s fastest growing sector. It grew at a rate of 8.5% in 2013, according to the African Economic Outlook for 2014. This has given rise to other promising opportunities in energy, transport, finance, training and security.

Malawi’s mining sector has been spurred on by improved access to finance and financial services, and Government progress in creating a favourable investment climate, reviewing outdated legislation, updating geophysical data, and promoting transparency and accountability through the Extractive Industries Transparency Initiative.

The first port of call for an investor interested in Malawi’s mining sector is the Department of Mines within the Ministry of Natural Resources, Energy and Mining. Geological data is available through the Geological Surveys Department and will soon be updated following national airborne geophysical surveys and a geological remapping exercise. The Department of Mine’s Mineral Rights Section provides guidance on applying for and processing licences. An assessing committee reviews applications periodically and makes recommendations to the Minister.

Malawi’s Mines and Minerals Policy (2013) outlines plans to establish a department to promote investments in mining and President Arthur Peter Mutharika has committed to developing an independent Contracts Negotiating Unit to facilitate investments in extractive resources. Progressive changes are expected with the new Mines and Minerals Act, which is currently being reviewed.

Exclusive Prospecting Licences (EPL) and Mining Licences (ML) are the main licences relevant for large-scale mining investment in Malawi. EPLs are allocated for three years with the possibility of renewal for two years and thereafter for one year while MLs last for a maximum period of 35 years or the estimated life of the ore body and are renewable for a period of 15 years. Applications for these licences must be submitted to the Mineral Rights Section, which is also in place to guide investors. Mine development and production is determined by a Mining Development Agreement that is negotiated with Government for a specific project and usually lasts for ten years. 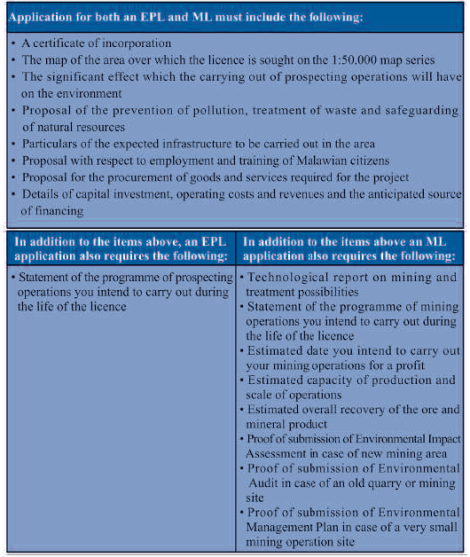 Malawi welcomes foreign investors. There are no restrictions placed on ownership, on the size of investment, on the source of funds or on whether products are for the export or domestic markets. The Malawi Investment and Trade Centre (MITC) began operating in September 2014 as the one-stop shop for trade and investment enquiries. MITC is in place to provide investors with relevant information and support in processing permits and licences.

The Malawi Chamber of Mines, to be launched this quarter, will promote the mining industry in Malawi with a collective voice. The Chamber will connect investors with mining and exploration companies as well as engineering firms and service providers in the country. Hon. Grain Malunga, former Minister of Natural Resources, Energy and Environment, is championing the re-establishment of the Chamber whose interim leadership includes Bwanje Cement’s Dean Lungu and Dina Longwe as President and Secretary, respectively, and Globe Metals & Mining Chrispin Ngwena, Mkango Resources’ Burton Kachinjika, Mota-Engil’s Paulo Rocha, Optichem’s Bobby Singh and Paladin Africa’s Greg Walker as committee members.

Investment opportunities, contact information and guidelines on how to invest can be found in the documents listed below and are available online:

When looking to invest in new territories, companies often have concerns about the safety and security of their staff. Here we take a look at the main points of concern for would-be investors.

There have been no confirmed cases of Ebola in Malawi or its bordering countries. Employees travelling to Malawi should seek independent medical advice well before departure. Companies sending employees to Malawi should take out appropriate insurance to include medical evacuation. Evacuation plans and incident and crisis management plans covering pandemics should be in place prior to arrival in Malawi.

Although there are a number of different ethnic groups in Malawi, there is very little cultural discord. Generally foreigners are well accepted though consideration should be given to the fact that Malawian society is relatively conservative and largely religious. Employees travelling to Malawi should receive pre-deployment briefings so that they can avoid any potentially embarrassing encounters particularly in relation to inappropriate dress or other behaviour that may be perceived as offensive.

Despite a recent public clampdown following the ‘Cashgate’ scandal, which saw public officials siphoning huge amounts of money from government coffers, corruption remains prevalent in Malawi. Companies sending employees to Malawi should ensure they are provided with pre-deployment briefings, which include how to deal with corruption.

Malawi has recently experienced extremely heavy and persistent rains, particularly in the south of the country. This has resulted in significant loss of life and has caused widespread damage to property, creating large numbers of internally displaced persons and a potential food deficit. In addition, infrastructure such as roads and power lines has suffered extensive damage. Being on the rift valley, Malawi occasionally experiences earth tremors that have resulted in damage to buildings and loss of life in the past. Companies investing in Malawi should establish robust crisis management and business continuity plans prior to commencing operations.

The most significant risk facing travellers to Malawi is that of road traffic accidents (RTA). Driving standards fall well below international standards, drink-driving is relatively common and many vehicles are in a poor state of repair and often lack headlights and other safety features. Roads in and between the main urban hubs are in generally good condition but at night streets are poorly lit. Roads outside the main urban hubs vary in standard from good to very poor, both paved and un-paved. Companies sending employees to Malawi should ensure that they use a reputable car hire firm with professional drivers. In addition, robust journey management and contingency plans should be in place prior to arrival and before all road movements.

Malawi is a relatively benign security environment though opportunist crime remains prevalent. Pickpocketing and petty theft are common occurrences in public places or where the victim is not maintaining situational awareness. In recent times, home invasions have increased in frequency and sophistication. Carjacking, though less common, does occur particularly on quiet roads away from the centre of main towns. Companies sending employees to Malawi should ensure they are provided with security awareness briefings and that accommodation options are reviewed by a reputable security consultancy prior to arrival in the country. Companies should arrange an airport meet and greet service through a reputable service provider for the arrival of their employees in Malawi.

Occurrences of civil unrest in Malawi, though isolated, can potentially erupt at very short notice. Incidents of civil unrest usually coincide with significant national events such as elections or industrial action. Malawians pride themselves on being friendly and welcoming but do not tolerate crime, and when a crime is committed in sight, i.e. theft, a violent reaction is provoked. Companies sending employees to Malawi should ensure they are provided with security awareness briefings and that they are signed-up to regular security updates.

There have been no incidents of extremist attacks in Malawi though the possibility of transnational terrorism affecting the country can never be ruled out. Malawi does not hold the same lure as a target for terrorism in comparison to countries such as Kenya and Tanzania. However, the use of the country as a staging post for extremist attacks elsewhere in the region cannot be excluded. Companies sending employees to Malawi must monitor the local and international situation.

Since its independence in 1964, Malawi has never been involved in bilateral cross-border or regional conflict though soldiers from its defence force do contribute to African Union (AU) missions. However, since the emergence of news on the prospects for the discovery of oil in Lake Malawi, a latent disagreement between Malawi and Tanzania relating to where the border between the two lies has once again resurfaced. Despite some posturing on both sides and an increase in military spending, this disagreement is unlikely to result in military conflict. Nevertheless, companies travelling to Malawi should ensure that they have necessary contingency plans in place. 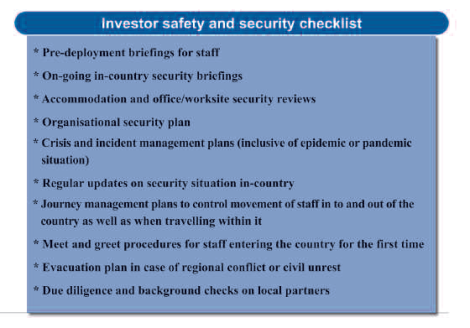