The piece “Countdown to Cape Town Mining Indaba” featured below was initially published in Malawi’s Mining Review Issue Number 21 2015 that is circulating this January 2015.

The Investing in African Mining Indaba (9-12 February) is an annual professional conference held in South Africa dedicated to the capitalisation and development of mining interests in Africa. Malawi will be represented by stakeholders from government, the private sector, relevant service providers and non-governmental organisations.The January and February editions of the Mining Review will be distributed at the Indaba.

Malawi is expected to showcase a largely unexploited but exciting mineral potential at this year’s mining Indaba slated for February 9 to 13 as the country’s mining sector has been abuzz with grassroot exploration activities being undertaken by both the Government and the private sector.

The Government is undertaking exploration activities under the auspices of the Mining Governance and Growth Support project (MGGSP), which is being financed by the World Bank’s International Development Association and the European Union. Under the project, the Government has been conducting an airborne geophysical survey, which will be followed by a remapping exercise to be implemented with funding from the French Government.

Director for Mines Department Charles Kaphwiyo explains that interest in Malawi’s mining sector from investors and financial institutions has grown following the opening of the Kayelekera Uranium Mine in Karonga in 2009, which put Malawi on the map as a mining investment destination.

Mining used to contribute only 3% to Malawi’s Gross Domestic Product (GDP) but the contribution jumped to 10% after the opening of Kayelekera. Though the Kayelekera Mine suspended production and is on care and maintenance, we expect the contribution of mining to GDP to leapfrog to 20% when all the upcoming mining projects come on stream,

says Kaphwiyo in a report entitled “Mineral Sector Status of Malawi.” Kaphwiyo explains that mining is a promising sector for Malawi since the mineral resource base is very diverse with very high untapped resource potential and from a geological framework of the region, major economic deposits remain to be discovered.

The performance of the mining sector has been satisfactory with most of the major minerals mined and processed registering upward trends. The upward trend in production is a reflection of increased demand by the consuming industries, and the export market, 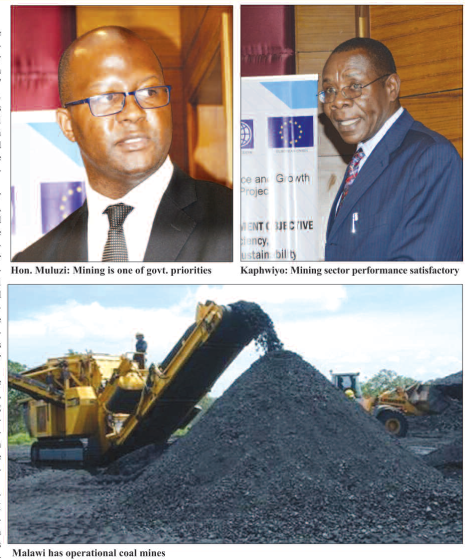 Image taken from page 3 of the Mining Review (January 2015)

Several deposits of rare earths including Kangunkunde, Songwe Hill, Tundulu and Chisi Island on Lake Chilwa have been proven in the Chilwa Alkaline Province in the Southern Region of the country.

Monazite occurrences are widespread throughout the Chilwa Alkaline Province and locally from residual concentrations in heavy mineral sands, which have been mapped out in several places in the country,

BGSI says in the report that Malawi has also exciting potential for the mining of phosphate (apatite), which is an essential raw material for the manufacturing of compound fertiliser mostly by acidulation.

The Tundulu, Chilwa Island and Kangankunde carbonatite complexes in southern Malawi all contain hard rock phosphate concentrations in the form of apatite. Of these, only the apatite rock of Tundulu in Mulanje District has any economic potential as a fertiliser raw material,

says BGSI in the report.

The report also says Malawi has potential for mining of coltan metals (niobium and tantalum which have similar properties), uranium and zirconium. Niobium is mainly used in specialist steels, superconductors and nuclear reactors while the main use of tantalum is in capacitors for laptop computers, mobile phones and digital cameras. It is also used in superalloys and surgical equipment while the principal use of uranium and zirconium is in commercial nuclear power generation.

ASX-listed Globe Metals and Mining is, currently, negotiating with the Malawi Government to start construction of a niobium mine at Kanyika in the country’s Northern District of Mzimba. The firm is set to invest about US$400-M to start mine construction at the site, which has enough quantities of the resource to support a 20-year mine life.

Malawi has also potential for the mining of nepheline syenite, which is used in the manufacture of glass and ceramics, and the notable deposit is located at Chikangawa in the Northern District of Mzimba. The Mzimba resource, whose economic potential was already assessed and proved, can also be used for the manufacture of alumina, extender pigments and inert fillers.

Malawi also hosts kimberlitic rocks which can be a source of diamonds in several areas of the country, which are being investigated by the country’s Geological Survey Department.

The Southern African country has potential for gold mining with small-scale miners undertaking gold panning operations in Lisungwe River in the Southern Region of the country. The Government granted exclusive prospecting licences to two private firms Portugal’s Mota-Engil and a British Company South East African Mining to search for gold in Lisungwe and Dwangwa in the Central Region respectively.

On exploration by private firms, Malawi has reported significant progress in the exploration for rare earths at Songwe Hill in the Southern Region. The prospector, Canada-listed Mkango Resources, is now engaged in a definitive feasibility study of the project after announcing positive feasibility study results last year. The rare earth elements to be mined at Songwe Hill, which has a net present value of US$293-million and consists of several million tonnes of rare earths to support an 18-year mine life, include lanthanum, cerium, praseodymium, samarium, europium, gadolinium, terbium, dysprosium and yttrium.

In addition, Malawi has potential for oil extraction with UAE firms Hamra Oil, RAKGAS and Pacific Oil and Gas undertaking preliminary aerial surveys in the country’s portion of the Great African Rift System, where was previously proved by scientific surveys to have potential for the discovery of oil.