The piece “Malawi pursues mining reforms” featured below was initially published in Malawi’s Mining Review Issue Number 15 2014 that was circulated in August 2014. 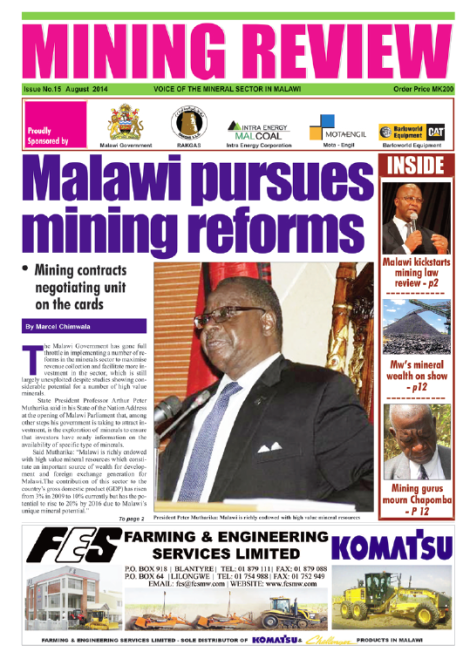 The Malawi Government has gone full throttle in implementing a number of reforms in the minerals sector to maximise revenue collection and facilitate more investment in the sector, which is still largely unexploited despite studies showing considerable potential for a number of high value minerals.

State President Professor Arthur Peter Mutharika said in his State of the Nation Address at the opening of Malawi Parliament that, among other steps his government is taking to attract investment, is the exploration of minerals to ensure that investors have ready information on the availability of specific type of minerals.

Malawi is richly endowed with high value mineral resources which constitute an important source of wealth for development and foreign exchange generation for Malawi.The contribution of this sector to the country’s gross domestic product (GDP) has risen from 3% in 2009 to 10% currently but has the potential to rise to 20% by 2016 due to Malawi’s unique mineral potential.

Government will, therefore, prioritize the effective exploration of these resources.

The Malawi Government is, currently, carrying out a country-wide airborne geophysical survey to identify areas with mineral potential and provide readily available information to prospective investors in the sector.with support from the World Bank and the European Union.

Professor Mutharika also announced that his government will shortly commence a geological mapping exercise of the whole country, as a follow up to the geophyisical survey, with backing from the French Government.

This will lead to the production of new geological, mineral occurrence, geochemical, metallogenic and seism-tectonic maps for our country,

said Professor Mutharika who was elected Malawian President in the country’s first-ever tripartite elections that were held last May.

He also said his government, which is committed to the promotion of the mining sector in the country, will endeavour to provide an enabling environment for attracting investments into the sector through the development of new policy, legal and institutional frameworks that protect the long term interests of the country.

In this vein, the Ministry has already started a consultation process to review the Mines and Minerals Act and turn it into a modern document that will support a thriving technologically equipped mining sector.

Mutharika, whose government is promoting transparency in the mining sector, said his he will also esnure that mining contracts are properly negotiated to maximise benefits for the country.

In this regard, Government will establish an independent contract negotiating unit in extractive resources. Further, we will subscribe to the Extractive Industries Transparency Initiative (EITI),

There are a number of foreign and local companies that are actively engaged in the exploration and evaluation of various minerals in different parts of Malawi including rare earth metals, uranium, gold and titanium bearing heavy mineral sands.