The piece “Airborne geophysical survey to attract mining investors” featured below was initially published in Malawi’s Mining Review Special Edition 2014 that was circulated in June 2014.

Since the below article was published, 98% of the survey had been completed in July. 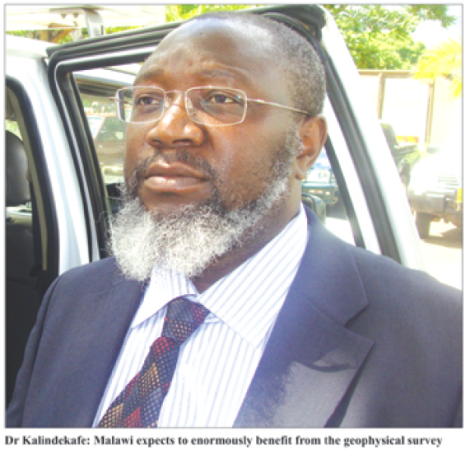 The Malawi Government says it is optimistic that the results of the ongoing countrywide airborne geophysical survey will attract more foreign investors into the country’s largely underexploited mining sector.

The survey is being conducted as part of the Mining Governance and Growth Support Project, which is financed using proceeds of a US$25-million loan from the World Bank’s International Development Association and a 5-million Euros grant from the European Union.

Malawi’s Permanent Secretary at the Ministry of Mining Leonard Kalindekafe says the survey, which was officially launched by Vice President Khumbo Kachali in November this year, will help the country attract mining investors by making available adequate data on mineral occurrence.

Realising that data previously collected was inadequate since it was collected at low resolution, we requested funding from the World Bank and the European Union to undertake this comprehensive country wide airborne geophysical survey.

Sanders Geophysics, which is based in the Canadian city of Ottawa, is conducting the survey in conjunction with the British Geological Survey International with the latter contracted as a quality control supervisor.

Kalindekafe explains that the survey is being done at 250m line spacing, 60m (+/-20m) terrain clearance and 5km tie lines, and the geophysical methods used include magnetic, radiometrics and gravity.

The magnetic method, which measures magnetic susceptibility of rocks, is targeting magnetic iron and iron-titanium minerals and some sulfide minerals.

Kalindekafe says the gravity measurements will define anomalous density of bodies within the earth as gravimeters mounted on aircrafts are used to precisely measure variations in the gravity field at different points on the earth’s surface.

These gravity anomalies are computed by subtracting a regional field from the measured field, which result in gravitational anomalies that correlate with known source body (oil, gas or rocks) density variation.

The gravity method also enables a prediction of the total anomalous mass (ore tonnage) responsible for an anomaly. It can also been used in the identification of lithology and at times ore bodies themselves.”

Kalindekafe says the data from the radiometric surveys will be used in geological mapping as different rock types can be recognized from their distinctive radioactive signature.

The elements of principal interest in the radiometric exploration are uranium, thorium and potassium.