Last week, Sovereign Metals announced mineral estimates at its Duwi Trend in the Central Malawi Graphite Project in Lilongwe District. The project has one of the largest, high-grade, flake graphite deposits in the world according to the maiden JORC Mineral Resource estimate.

We are very pleased with this initial Mineral Resource estimate at Duwi, that validates our belief in the potential for low-cost, high-grade, flake graphite mining in Malawi. CSA’s resource estimates and metallurgical testwork by Mintek and SGS Lakefield reinforce that Duwi is in the top handful of potential new graphite producers around the world. We will now get on with further proving the potential both at Duwi and at our large portfolio of saprolite-hosted exploration targets.

Sovereign Metals, registered on the Australian Stock Exchange, is exploring the Central Malawi Graphite Project (CMGP), near Lilongwe. This Project is composed of three tenements totalling 7,261 square kilometres. A number of substantial flake graphite gneiss belts have been identified within the CMGP licences.

Through rock-chip sampling, mapping and the Heli-VTEM survey Sovereign has identified over 50 targets including six prime, large, high-grade, flake graphite targets. These are five prospects within EPL0372 together referred to as the Duwi Trend and the Nanzeka Prospect within EPL0355. The scoping study is expected to be completed in early 2015. 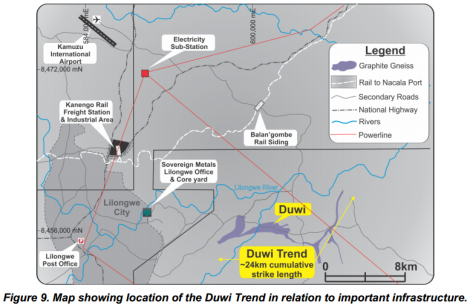 The highlights from the company’s announcement are: