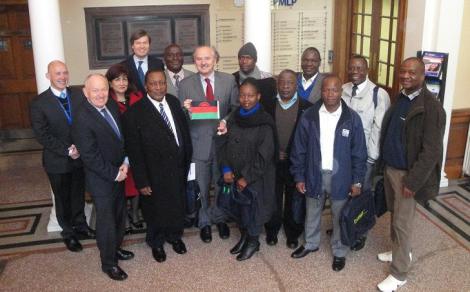 Nine government officials participated in an “interactive knowledge transfer” at the University of Dundee’s Centre for Energy, Petroleum and Mineral Law and Policy this week. Director of CEPMLP, Professor Peter Cameron, is featured centre, holding the Malawian flag (Photo courtesy of CEPMLP News)

This week, the University of Dundee’s Centre for Energy, Petroleum and Mineral Law and Policy (CEPMLP) hosted a government delegation from Malawi in an “interactive knowledge transfer” programme. The group of nine Malawian civil servants is being funded by the World Bank through the Malawi Mining Governance and Growth Support Project, which was approved in March 2011 and launched in January this year. The Centre described the visit

This is evidence of the ongoing relationship between the Centre and the Government of Malawi.  The Director of the Centre, Professor Peter Cameron, is currently providing technical assistance to the government as it develops a new Malawi Mines and Minerals Act. The current one dates back to 1981. In addition, Malawi’s Principal Secretary of the Ministry of Mining, Dr Leonard Kalindekafe, completed his doctoral studies with the Centre.

The delegation of Malawians from the Reserve Bank of Malawi, Ministry of Mining, Ministry of Justice, Ministry of Economic Planning and Development and the Ministry of Finance are taking part in “valuable, broad ranging, constructive, internationally-focussed seminars in Dundee, in partnership with and led by CEPMLP”, according to Daniel Gilbert, who presented to the group on the EI Source Book project on Wednesday. Charles Kaphwiyo, Director of Mines at the Ministry of Mines, and Jalf Salima, Deputy Director of the Geological Survey Department are among the delegation.