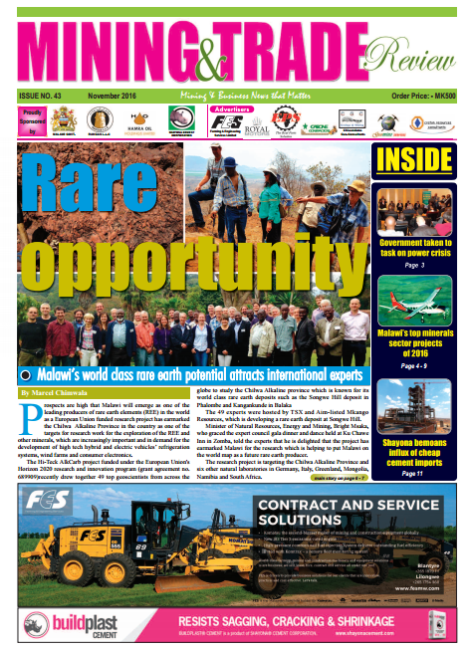 Prospects are high that Malawi will emerge as one of the leading producers of rare earth elements (REE) in the world as a European Union funded research project has earmarked the Chilwa Alkaline Province in the country as one of the targets for research work for the exploration of the REE and other minerals, which are increasingly important and in demand for the development of high tech hybrid and electric vehicles’ refrigeration systems, wind farms and consumer electronics.

The Hi-Teck AlkCarb project funded under the European Union’s Horizon 2020 research and innovation program (grant agreement no. 689909) recently drew together 49 top geoscientists from across the globe to study the Chilwa Alkaline province which is known for its world class rare earth deposits such as the Songwe Hill deposit in Phalombe and Kangankunde in Balaka.

The 49 experts were hosted by TSX and Aim-listed Mkango Resources, which is developing a rare earth deposit at Songwe Hill.

Minister of Natural Resources, Energy and Mining, Bright Msaka, who graced the expert council gala dinner and dance held at Ku Chawe Inn in Zomba, told the experts that he is delighted that the project has earmarked Malawi for the research which is helping to put Malawi on the world map as a future rare earth producer.

The research project is targeting the Chilwa Alkaline Province and six other natural laboratories in Germany, Italy, Greenland, Mongolia, Namibia and South Africa.

A group of 49 top-notch Malawian and International geoscientists in early October participated in a workshop of over 20 seminars and fieldwork on Malawi’s carbonatite zones located in the Chilwa Alkaline Province, which are host to world class rare earth deposits such as Mkango Resources’ Songwe Hill.

The study with the theme “Fenite Geophysics and Exploration Tools” was conducted as part of the European Union funded Hi-Teck Alkcarb Project, which aims at developing new geomodels and sustainable exploration methods for alkaline igneous rocks and carbonatites.

The workshop took the experts to a number of carbonatite deposits in the Chilwa Alkaline Province including Songwe Hill, Nkalonje and Namangale in Phalombe and the Kangankunde deposit in Balaka. The team was based at the Sunbird Kuchawe Inn in Malawi’s old Capital, Zomba where the experts shared knowledge on the field work and presented over 20 seminars and presentations. 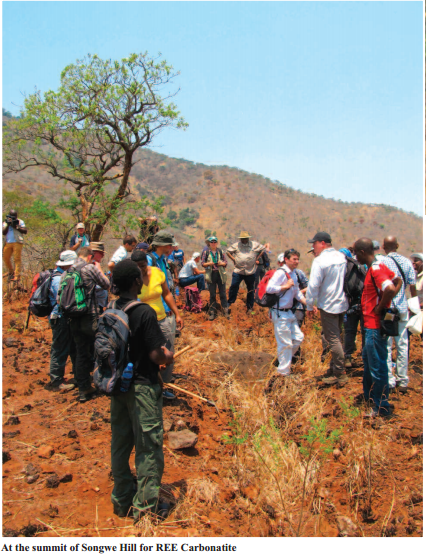 The experts were hosted by the University of Exeter and Mkango Resources, a mineral exploration and development firm currently undertaking a definitive feasibility study for rare earths at Songwe Hill in southern Malawi’s district of Phalombe.

Malawi’s Minister of Natural Resources, Energy and Mining, the Honourable Bright Msaka, who graced the meeting, said his presence at the function was a symbol of Malawi government’s full support of the research project whose results would contribute to sustainable exploitation of rare earth elements for economic development of the country.

As government, we very much value this research because it will advance the understanding of the Chilwa Alkaline Province as a potential source of rare earth elements. Mining is a knowledge based industry and takes time for its benefits to accrue so we believe as a country that in due course the knowledge gathered in this endeavor will help in developing Malawi’s mining industry,

He said the choice of Malawi as a target for the research manifests that the country has potential for world-class deposits of rare earths.

Msaka, therefore, said the project is in tandem with Malawi government’s initiative to diversify the country’s economy from its overdependence on agriculture as the future of tobacco as the country’s main foreign exchange earner is being threatened by the global anti-smoking campaign.

Government is very optimistic that rare earth mining will make a substantial contribution to the economy in future as these minerals have diverse uses in high tech applications.

I understand that the minerals are important ingredients in permanent magnets, electric vehicles and consumer electronics and this diversity in use calls for more research,

Msaka also said the function will promote networking between local and international experts to facilitate exchange of knowledge and expertise on the development of the country’s rare earth resources.

The Minister thanked the European Union, Professor Francis Wall of the University of Exeter and Alexander Lemon President of Mkango Resources for making the workshop event such a great success.

To Mkango Resources, we are mindful of the fact that you are spearheading the development of the country’s rare earth resources, and we thank you for that. We also thank you for the resources you are putting in to develop Phalombe through the numerous corporate social responsibility projects you are undertaking,

Hi-Teck AlkCarb Project Leader, Professor Frances Wall, said the Chilwa Alkaline Province and the rare earth deposit at Songwe Hill currently being developed by Mkango Resources are very important natural laboratories for the world as it strives to develop new sources of rare earths to meet the demand for minerals that produce high strength permanent magnets which are used in Hybrid & Electric vehicles, Consumer Electronics, Wind farms,  Refrigeration  systems and Catalytic Converters; to name just a few applications which are all growing due to technology advancement.

Wall, a Professor of Applied Mineralogy and Head of the Camborne School of Mines, University of Exeter, said the event offered fruitful discussions between geologists and geophysicists on the exploration and development of carbonatite-based rare earth deposits.

We need to find new exploration techniques and geological models as we develop new deposits for the high technology minerals. Malawi, specifically the Chilwa Alkaline Province, is a very important natural laboratory for this research,

She also said the outcomeof the research will be published in both local and international media and will help put Malawi geology and mineral deposits on the world map.

Professor Wall thanked Mkango Resources for hosting and organizing the event in Malawi and announced that a donation of 450,000.00 Malawian Kwacha had been raised by the international delegates to paint a further 2 classrooms in the Songwe project area, where to-date over 20 classrooms have already been painted thanks to Mkango Resources and its local CSR non-governmental partner bongo Worldwide and their Happy Classrooms Project.

The Happy Classrooms Project entails painting of classrooms with illustrations depicting what is in the school syllabus for easy learning by the students.

Mkango Resources President, Alexander Lemon, said the event was incredibly important for Malawi as i facilitated exchange of knowledge between the international and local experts including lecturers from institutions of high learning such as Malawi University of Science and Technology and Chancellor College, who will be able to pass the knowledge and expertise gained to students.

It is a great honour for Mkango Resources to partner with the Hi Tech AlkCarb research programme and for us to invite 49 world class experts to Malawi the warm heart of Africa and participate in this exciting workshop, which will result in new groundbreaking research. I trust this workshop will be the start of a new era of research, collaboration, and many more initiatives beneficial to the nation of Malawi and its natural resources sector,

The HiTech AlkCarb project is funded under the European Union’s Horizon 2020 Research and Innovation programme and its main objectives include:

The Hi-Tech AlkCarb project kicked off earlier this year at a meeting held from February 22-23 2016, at the Natural History Museum in London. 29 participants attended the meeting, representing each of the 12 project partners who are:-

Geological Survey of Denmark and Greenland

During October 1 to 8, The University of Exeter, together with industry partner Mkango Resources Ltd, hosted an international workshop in Malawi attended by 49 geoscientists from around the world.

The workshop, “Fenite and Geophysics as Exploration Tools”, is part of a University of Exeter-led research project, HiTech AlkCarb, which is developing new geomodels for alkaline and carbonatite provinces.

These are minerals crucially important to ICT, green energy, and foundation to a growing digital economy. According to Project Coordinator, Professor Frances Wall, this is the largest research ever undertaken on carbonatites and alkaline rocks.

The Malawi workshop centered on the Chilwa Alkaline Province, a location renowned for its significant carbonatite deposits.

The group visited Kangankunde, Tundulu and Songwe Hill, the flagship  deposit of exploration partners Mkango   Resources. Over 20 seminars were given by leading international experts as part of the event that had 11 Malawian leading geological experts from the Geological   survey, Mines department and Malawian geological consultancies.

Burton Kachinjika MSc, Country Director of Mkango Resources in Malawi and former student of Barry Wills of the Camborne School of Mines, organised logistics and participated in fieldwork outings and seminars.

In addition to geological fieldwork, of particular interest to the group was a visit to one of the local primary schools where Mkango Resources has provided renovations with an innovative local NGO partner, bongo WorldWide.

Their Happy Classrooms project sees the school curriculum painted on the classroom walls which not only provides  teaching aids (in an area where there is an absence of text books), but also stimulates children within a beautiful building.

Through this programme, we are building a foundation for the future, educating and training children from the area so that when we rollout the actual mining works, we should not go elsewhere to look for employees, but recruit from within.

During the gala dinner of the event, corporate social responsibility was stressed in speeches both by Hon. Bright Msaka, Minister of Natural Resources, Energy and Mining and Mr. Alexander Lemon President of Mkango Resources.

The workshop was extensively documented on twitter (@HiTech_ AlkCarb), and through several television broadcasts and newspaper articles in The Times, Malawi’s major media group.

Mining in Malawi Note: Take a look at the PhD opportunity in Earth Sciences at the University of Exeter with a project based on Malawi’s Chilwa Alkaline Province.