Update 9 December 2013: Malawi’s national newspaper The Daily Times continues to investigate the arms deal, published with another cover story. In today’s paper, Minister of Defence, Ken Kandodo, explains that the arms deal was initiated and executed by the Malawi Defence Force (MDF) rather than by the president Joyce Banda as some newspapers have erroneously reported. Kandodo also clarified the procurement process for the vessels as there has been a call for the Anti-Corruption Bureau to investigate the deal.

I want to make it clear that all due processes were followed in the procurement of the defense equipment. The acquisition is part of an on-going process to equip and up scale the Malawi Defence Force to enable it undertake a variety of operations, including the protection of Malawi’s natural resources, border patrols, peace keeping missions and search and rescue operations.

We should be celebrating the efforts of our armed forces and respecting the requirement that they be properly resourced and have the adequate logistic support to do their jobs and fulfill their mission. 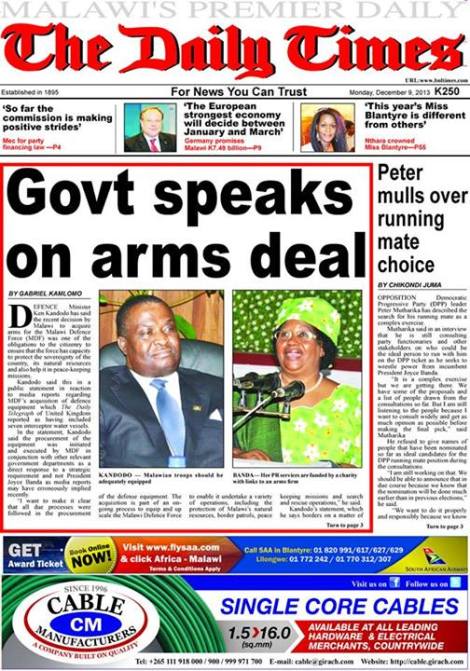 Update 3 December 2013: The “arms deal” has made the front page of the Malawian newspaper The Daily Times. Justin Dzonzi, lawyer and civil rights activist, Rafiq Hajat, Executive Director of the Institute for Policy Interaction, and Billy Mayaya agree that  ”the allegations are serious and government owes Malawians a lot of explanation”. Nicholas Dausi and Jessie Kabwila, spokespersons for the Democratic Progressive Party and Malawi Congress Party, respectively, asked for an investigation of the link between the PR firm Bell Pottinger and the arms contract.

The Malawi Defence Force Marine Unit has commissioned seven interceptor boats from Nautic Africa which are being deployed on Lake Malawi. The Paramount Group has a majority stake in Nautic Africa.

There is absolutely no relationship between this contract and any charitable work undertaken by the Ichikowitz Family Foundation. 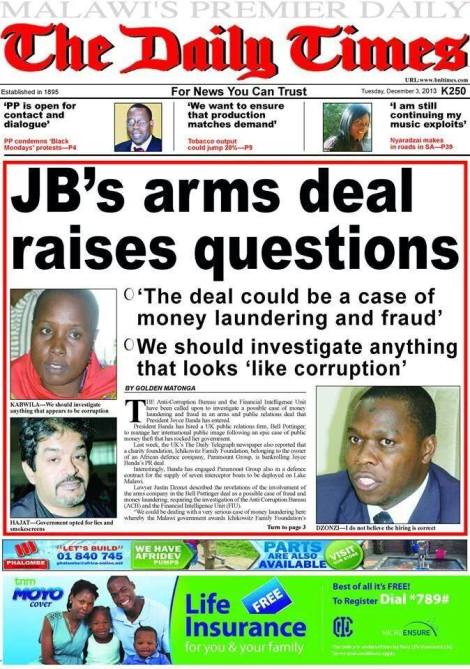 Update 19.30, 29 November 2013: A few days ago, defenceWeb, which describes itself as “Africa’s defence and security portal”, published a story that Tanzania has upgraded 14 of its fighter jets. The article links Tanzania’s recent military upgrade to the ongoing dispute with Malawi over Lake Malawi. Perhaps President Joyce Banda of Malawi was aware of this when she spoke to The Telegraph this week (see story below).

Last year, the Tanzania Ministry of Defence said the government will soon spend more on the procurement of defence equipment for the army and the air force as country strengthens its intelligence, surveillance and reconnaissance capabilities in the face of security threats such as maritime piracy and trans-national and home-grown terrorism.

The government is also seeking better air and naval defence capabilities to defend newly-found offshore hydrocarbon resources and secure its territorial waters against economic crimes such as illegal fishing. Last year, Tanzania mobilised its defence forces and threatened to go to war with neighbouring Malawi in a feud over exploratory drilling works which were taking place in an oil-rich maritime territory in Lake Nyasa which borders the two countries.

Malawi insisted that the drilling was happening on its side of the marine boundary while Tanzania asserted that the oil-fields fall within its maritime domain. Mediation efforts on the boundary dispute are still in progress.

The Government of Malawi has signed a contract to purchase armed patrol vessels for Lake Malawi, President Joyce Banda revealed to Aislinn Laing, Southern Africa Correspondent for the British Daily and Sunday Telegraph. Banda has commissioned seven inceptor boats from Paramount Group, Africa’s largest private defence and aerospace company, which will be fitted with arms to patrol the lake. This revelation comes at a sensitive time as Malawians and Tanzanians await the decision of the Africa Forum’s mediation team on the dispute of national boundaries across Lake Malawi, or Lake Nyasa as the lake is known in Tanzania.

In the interview, Banda defends the government’s decision to purchase the patrol boats during a time when government spending is being cut. The British and Norwegian governments, the World Bank and the African Development Bank, among other donors, are withholding budget support amid high-level government corruption popularly known as “cashgate“.

Bell Pottinger, a London-based PR company, has been employed to improve Banda’s reputation in Europe following the response of donors to the cashgate scandal. Laing suggests that the Ichikowitz Family Foundation is funding the PR company and draws an interesting, worrying link to Eric Ichikowitz, who is also Executive Director of Paramount, the company supplying Malawi with the vessels. It is not clear if Banda knew about this link.

At first in the interview, Banda explains that the vessels will be used to prevent illegal immigration through Malawi’s “porous borders”, but then she turns her attention to the ongoing dispute between Malawi and Tanzania. She asserts that “we are already invaded as we speak” claiming that Tanzania has boats on the lake. Nevertheless, she concludes that the dispute is not the reason for the purchase of vessels, however, her finals words are telling, “But we really, really, need protection as a nation.”

We expect a response from the Tanzanian Ministry of Foreign Affairs and International Cooperation, if an incident earlier this year is anything to go by: At the end of May 2013, the Tanzanian parliament was informed about Tanzania’s acquisition of six passenger ships, to be deployed on Lakes Malawi (Lake Nyasa as it is known in Tanzania), Tanganyika and Victoria. The Tanzanian Minister for Transport Harrison Mwakyembe’s announcement was followed a response from the Malawian Ministry of Foreign Affairs and International Cooperation urging the Tanzanian government “to desist from launching vessels or indeed undertaking any acts on the disputed territory, as this will jeopardise the current mediation process”.

The Malawian government maintains that the lake falls entirely within the nation’s borders, while Tanzania is contesting this territorial arrangement that is based on a colonial Heligoland Agreement from 1890. Tanzania wants the national boundaries to be withdrawn at a midway point between the two across, which will cut across the lake. The Malawian government has already awarded several companies with rights to explore for hydrocarbons in the lake bed.

You can watch a short video of the interview between Banda and Laing below. We have included a transcript in case you are unable to stream the video.

Aislinn Laing (AL): I understand that at the beginning of November you signed a contract to buy seven armed patrol vessels for Lake Malawi, and I just wondered at a time when the IMF [International Monetary Fund] is saying that budgets need to be restricted and priority needs to be given to social spending, why that was a priority?

Joyce Banda (JB): Do you know what is going on? Somalis are ending up in this country. This is a very very serious matter. I have been asking all our friends, “get me patrol boats for the lake, our borders are so porous”. They come from Tanzania, they end up on the lake, just last year 50 of them drowned on the lake. So they come all the way to Nkhata bay, the get out, and they get into the mountain, they stay there for a month, they get in the country, they bypass ports, so they leave this country of ours Malawi to United States, to United Kingdom.

AL: Do you think that Malawians would be happy about their president spending money on patrol ships and pledging to buy more patrol ships?

JB: Yeah, yeah, in fact it was a request from the people. You don’t know how nervous Malawians have been about the border dispute.

AL: When I canvassed Malawians in the last few days, no one has been aware of security concerns. What they are aware of is doctors being without latex gloves in hospital and important drugs. That seems to be the concern that most people, not the security in Lake Malawi.

JB: What? No, no, no which Malawians are you talking about? People have been nervous there. If you go to the border now, Tanzanians have already put boats on the lake. We are already invaded as we speak. We have got boats on the Lake. But that’s not what we are dealing with right now. Maybe when we have bigger ships. But we really, really, need protection as a nation.

4 responses on “Malawi to put armed patrol vessels on Lake Malawi, “We are already invaded as we speak” – President Joyce Banda”