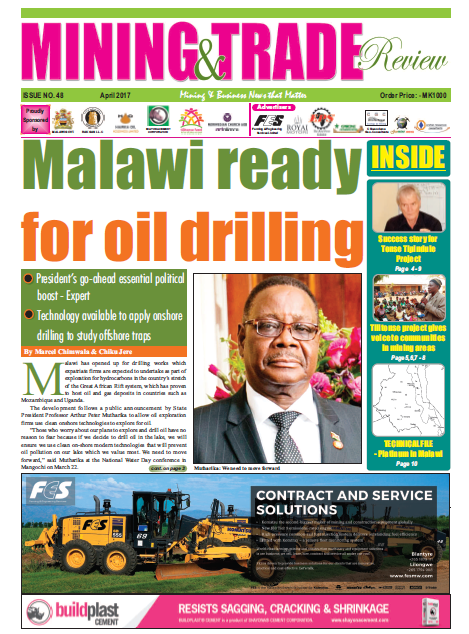 Malawi has opened up for drilling works which expatriate firms are expected to undertake as part of exploration for hydrocarbons in the country’s stretch of the Great African Rift system, which has proven  to host oil and gas deposits in countries such as Mozambique and Uganda.

Those who worry about our plans to explore and drill oil have no reason to fear because if we decide to drill oil in the lake, we will ensure we use clean on-shore modern technologies that will prevent oil pollution on our lake which we value most. We need to move forward,

said Mutharika at the National Water Day conference in Mangochi on March 22.

Industry captains have, meanwhile, commended Mutharika for the remarks saying they demonstrate progressive and steward leadership as Malawi needs not to lag behind its neighbours in prospecting for oil resources.

Head of Craton Resources, a Consulting firm working in the country’s oil and gas prospecting subsector, James Chatupa [also country manager for Pacific Oil with rights to petroleum exploration block 6], told Mining & Trade Review that such political announcements are what investors need to risk their capital and invest in the oil subsector which is capital intensive.

A positive view from the political leadership is what foreign investors need to risk capital for oil exploration.

Asked whether the government’s recommendation for onshore drilling will achieve the best results for those companies with offshore tenements, Chatupa said a company’s exploration philosophy and interpretation of the geological environment are some of the options it ranks on whether to drill onshore or offshore.

In most cases it is advisable to undertake seismic surveys before deciding where to drill. Then there may be a chance of getting better results,

Coordinator for the Chamber, Grain Malunga, said companies with off-shore tenements can use the angle drilling technology which is capable of producing satisfactory results.

Using the available technology, we will get results similar to those obtained through offshore drilling. Note that the companies will benefit from non expenditure of drilling platforms which usually comprise old ocean ships which are designed for oceans and not narrow and rougher lakes like ours. Companies will benefit from non expenditure on appropriate drilling platforms.

The Malawi Government demarcated Malawi’s portion of the African Rift System into six blocks which were awarded to multinational oil exploration firms to explore for hydrocarbons.

Block 1 located onshore in northern Chitipa and Karonga Districts was awarded to South Africa’s SacOil Holdings, Block 2 and 3 tenements located offshore in the northern part of Lake Malawi are held by Hamra Oil, Rak Gas MB45 Limited has Blocks 4 and 5 stretching from Nkhotakota, Salima and Dedza offshore and onshore down South to Machinga, Blantyre and Mulanje while Pacific Oil holds Block 6 tenement located in the Lower Shire Districts of Chikwawa and Nsanje.

Hamra Oil Country Manager Ali Azzuni earlier told Mining & Trade Review that his company intends to carry out onshore oil drilling works as part of its exploration works because it is more expensive to drill offshore and does not make economic sense with the prevailing low oil prices on the world market.

Azzuni said Hamra Oil is in the process of assembling a team of local and international geologists to execute the survey whose results will be essential in proving the availability of oil reserves in Malawi.

However, there have been suggestions from the civil society led by British Non-Governmental Organisation, Oxfam, that Malawi is not yet ready for oil exploration because it does not have adequate legal implements in place.

[See Oxfam’s report here: Malawi’s troubled oil sector: licenses, contracts and their implications; the main point was the fact that signed agreements for oil and gas exploration and production contain weak and incoherent tax terms not aligned with international best practice, and they were signed days before the last election, behind the backs of key senior civil servants, before financial modelling was complete, and against the advice of the Solicitor General, with ongoing investigations being carried out by the Anti-Corruption Bureau into certain company payments to Malawian organisations in connection to the fast-tracked agreements].

But Desk Officer for oil and gas at the Ministry of Natural Resources, Energy and Mining, Cassius Chiwambo, said Malawi has in place a Petroleum (Exploration and Production) Act which was approved in 1983 and in addition the country reviewed the Regulation to the Act in 2009.

If you can see, all these were done prior to the award of licenses in 2011,

He, however, said Government is in the process of reviewing the petroleum policy so that it is in tandem with modern best practices.

Chiwambo explained that the drafting process of the Terms of References (TORs) for an expert to review the Petroleum Act of 1983 has only been finalized and the expectation is that the assignment will be advertised before June, 2017.

From around early April, 2017, government has planned to conduct at least 21 consultative workshops, at district, regional and national level, on both of these assignments.

The Malawi Government suspended oil exploration for a year soon after Mutharika ascended to power in 2014 presidential elections following his victory over former President Joyce Banda.

Mutharika, who ordered a review on the award of the licences, drove the oil and gas sub-sector into exasperation when he said Malawi was not in a hurry to kick-start oil and gas exploration.

Nobody should push us. We can even afford to wait and leave the exploration for oil resources for future generations,

he was quoted on state-funded MBC TV.

Industrialists say such a lengthy suspension of the prospecting activities has negatively affected the timing of the exploration licences.

Under the Petroleum (Exploration and Production) Act, companies are normally granted a 4-Year Tenure for Exploration, subject to renewal thereafter. Customarily, any delays caused by government suspension of exploration operations, would be compensated by an equivalent extension period. I would presume this was the case with the 2014 suspensions,

A report reviewing the second phase of the implementation of the Malawi Growth and Development Strategy released by the Ministry of Finance, Economic Planning and Development also faulted the suspensions.

Within the past four years, Malawi issued exploration licences for all six blocks of oil and gas only to suspend them and subject them to review. While sensible and nationalistic, this runs the risk of adding uncertainty to the mining governance regime and raises political risk rating and may affect the future cost of raising funds for mining ventures in Malawi,

The discovery of commercial petroleum resources along the African Rift System, as evidenced in Uganda and Mozambique has raised interest from several multinational corporations to invest in Malawi’s Petroleum Sector.

During the first round of applications in 2011, the Malawi Government through the then Ministry of Mining received over 10 applications.

The same trend was experienced in 2013 and is still persisting up to date. 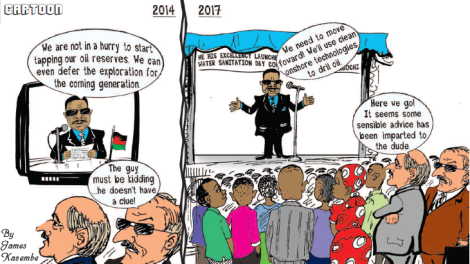