Yesterday 600 delegates gathered for the opening of the Malawi Investment Forum. President Arthur Peter Mutharika was conspicuous in his absence. In the afternoon, a number of sector specific sessions were held including “Energy & Mining – Leaders of Industrialisation”. The Minister for Natural Resources, Energy and Mining, Hon. Bright Msaka SC, joined the panel that was chaired by Dean Lungu, Director of Bwanje Cement Limited and Chair of the Malawi Chambers of Mines and Energy, and British Greenheart Energy‘s Mike Eyre. Today the Forum continues with business to business meetings.

Among the 100 people or so in the overfilled Ibis Room at the Bingu wa Mutharika International Conference Centre were investors and business owners with the majority focussed on energy. Pertinent given this infrastructural challenge places a significant constraint on mining ventures in Malawi and was one of the reasons Malawi’s largest mining project Kayelekera Uranium Mine was forced to go on care and maintenance in 2014.

Each panelist, listed below, was given 3 to 5 minutes to talk with the focus initially on energy, followed by mining. Aldwych International‘s Managing Director, Mark Fitzpatrick, indicated that the Africa-centred energy company aims to provide the market with what it needs,

The electrification rate in Malawi is 1000 times less than the UK and 500 times less than South Africa. […] Malawi, along with Norway, is one of the least contributors to global warming so we would not be pushing the renewable agenda […] rather meeting the minimum base load power requirements.

Dye Mawindo, CEO of the Millennium Challenge Account (MCA) in Malawi, indicated that he has the task of ensuring USD 350m is spent by 19 September 2018 on energy. Currently, this involves rehabilitating Nkula A Power Station, which will also raise the capacity to 36 megawatts.

This is just a drop in the ocean. […] The problems go beyond generation but to the highway, to transmission of electricity.

As a result, MCA has committed USD 260m to upgrade transmission lines across the country. John Kandulu, CEO of the Electricity Supply Corporation of Malawi (ESCOM) confirmed Government’s commitment to this. Kandulu clarified that the interconnection process with Mozambique and Zambia is ongoing with completion of the feasibility studies are expected next year. The connection between Malawi and Mozambique will be finalised in 2022. Government officials noted that the recently assented Electricity (Amendment) Act of 2016 provides the framework for a better environment for independent power producers and the setting of tariffs based on the form of technology. This has included splitting ESCOM into two as part of reforms in the sector being financed by MCA. ESCOM will focus on the supply of electricity to end-users while generation will fall under the remit of the Electricity Generation Company (EGENCO).

The Director of Energy, responding to a question about progress on Chinese-financed Kamwamba coal-fired power station in Neno District, said

It is on. We will be getting coal from Mozambique and will be along the railway line. […] We will bring coal by rail to the plant and arrangements for the investment are at a very advanced stage.

The reality of the challenges facing electricity generation and transmission in Malawi was brought home when a Chinese businessman commented that “I know this country needs power”, recalling his recent experience of trying to purchase a generator from Game but they were all sold out. He also asked, but did not receive a clear response, about when the International Monetary Fund restrictions will be lifted on the form of loans the Government can take because the Chinese government pledged in December last year to invest USD 60 billion to invest in Africa over three years and Malawi cannot access it.

Lungu turned the session over to mining, indicating Malawi’s potential for rare earths in light of recent work carried out by over 40 geologists in the Chilwa Alkaline Province, hosted by Mkango Resources. Department of Mines’ Senior Mining Engineer Cassius Chiwambo took the floor and gave a rousing speech on Malawi’s mining sector and efforts by Government. See the video below.

Chiwambo was followed by several comments and questions on financing and Government support to the artisanal and small-scale mining (ASM) sector and if it is possible to plan energy and mining projects together. Lungu mentioned that his company, Bwanje Cement, requires 20 megawatts to run the proposed mining project.

Minister Msaka closed the session (see video below) quipping that it is the longest he has remained silent in a meeting. He summed up Government’s efforts to enable a competitive, business-friendly environment for companies and investors in the two sectors.

The following projects related to Globe Metals & Mining Kanyika Niobium Project and Mchenga Coal Mine expansion and power plant were listed in the compendium on investment projects. (Click on the images to enlarge). 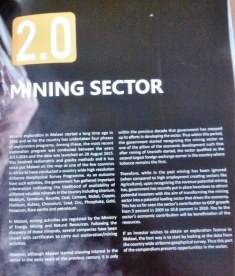 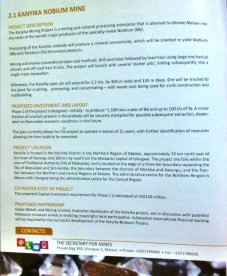 Outside the auditorium and conference hall, there were about 30 companies and government institutions at booths. Malawi Women in Mining Association and Nyasa Mining Cooperative both displayed their raw and finished products produced in the ASM sector. 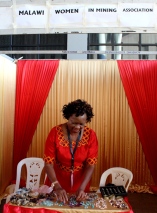 There were no women on the panel and only 6 of the 54 listed speakers, panelists and moderators are women (11%) for the Investment Forum, according to the .

One response to “Malawi Investment Forum 2016: Opportunities in Mining and Energy”