Update 14 August 2013: The South African Institute of International Affairs (SAIIA) posted an analysis piece on their website that discusses the weaknesses of the SADC in mediating the dispute between Malawi and Tanzania over Lake Malawi. Aditi Lalbahadur, a researcher with SAIIA, penned the article “Malawi vs Tanzania vs SADC: Regional dispute resolution bites the dust“. Also today, Peter Mutharika, the brother of the former president who died in office in April 2012, again clarified that he did not make “warmongering” remarks in relation to the lake dispute, but maintains that the issue is non-negotiable.

Malawi is hosting the 2013 Southern African Development Community (SADC) Summit this week. The Lake Malawi border dispute between the Malawian and Tanzanian governments is not on the agenda because former leaders from the SADC region who are part of the Africa Forum of former African Heads of State and Government are in the process of resolving the dispute (view our ongoing coverage here).

The Africa Forum is expected to reach a decision on the lake dispute by 30 September 2013.

At the 33rd Summit, to be attended by 14 heads of state, discussions will be focused on deepening regional trade integration, cross-border infrastructure investment, and the security situation in the region.

A Namibia-based civil society organisation penned an open letter to the leaders attending the SADC Summit asking them to discuss the lake dispute and the Zimbabwean elections.

The Malawi, Tanzania lake dispute is not our agenda, unless the President [Joyce Banda, President of Malawi] wishes to brief her fellow SADC Presidents on the progress and status of the matter.

Today (12 August 2013), at the 9th Southern African Civil Society Forum, Malawi’s Minister of Foreign Affairs and International Cooperation, Ephriam Chiume, indicated that both Tanzania and Malawi’s governments have agreed to take the dispute to the International Court of Justice if the former SADC leaders does not resolve the dispute.

Lake Malawi is sitting on potentially lucrative oil reserves which may explain the reawakening of the dispute between Tanzania and Malawi. The Malawian government awarded two companies, SacOil and Surestream Petroleum, exclusive prospecting licences for several zones in Lake Malawi, and a third company, Kainsha Energy, has applied for a licence.

Malawi remains resolute that Lake Malawi (known as Lake Nyasa in Tanzania) lies within Malawi’s borders based on the Heligoland Agreement signed between Britain and Germany in 1890 that was later reaffirmed by the Organisation of African Unity (replaced by the African Union in 2001). Tanzania, on the other hand, wants the border to be reexamined based on the 1982 United Nations Convention on Law of the Sea that stipulates boundaries should fall at the midway point between two states.

Peter Mutharika, presidential aspirant with the Democratic Progressive Party (DPP) and brother of Malawi’s former late president, caused a stir in Malawi when he declared at the beginning of August that Malawi should not negotiate with Tanzania. Mutharika, a professor in International and Comparative Law, suggested that there is

No need to negotiate, Lake Malawi belongs to Malawi, and it will always belong to Malawi.

Tanzania is only taking advantage of the weak leadership we currently have, but deep down in their heart they know that not even an inch of the lake belongs to them.

When we take back government next year, all this nonsense will end. And I will deploy more ships on the lake to boost our economy and create jobs for our young people. 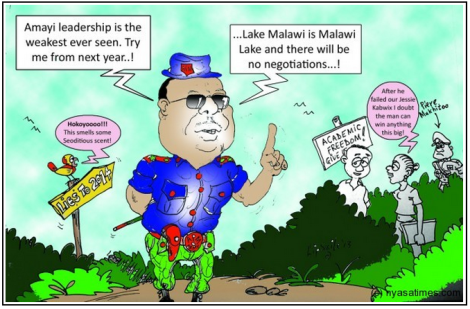 I did not say we should go to war over the lake, however, I did acknowledge that the lake has always been part of Malawi since the 1890s and the name clearly states that it is called Lake Malawi because it belongs to our country.

The government of Tanzania clearly knows that it is owned by Malawi for over 123 years. This issue of the lake is non-negotiable. There is no need to discuss or determine who owns it. It is quite obvious that they suspect that there is natural gas and oil and sees it as an opportunity to make money and benefit from. When we hear that the lake is being negotiated on, what is the basis?

Two Malawian human rights groups, the Centre for Human Rights and Rehabilitation (CHRR) and the Centre for the Development of People (CEDEP), issued a statement cautioning Mutharika’s approach, although not all Malawians believe “dialoguing” [sic] is better than “warmongering”,

We at CHRR and CEDEP join a cross-section of patriotic peace-loving Malawians who have voiced out their concern against the recent remarks made by Democratic Progressive Party President Peter Mutharika about the controversial Malawi-Tanzania lake dispute, stating there was no need for negotiations between the two parties.

[…] Not only shown his current desperation to ascend to the through come 2014 even if attaining such a feat involves costing the lives of many but also his party’s philosophy which is clearly against any form of contact and dialogue.

Memories are afresh amongst many Malawians of how the DPP, during its golden era, trampled on their democratic rights through its confrontational or physical approaches in resolving matter of national interest particularly against its critics.

The ongoing dispute does not seem to have affected investors in Malawi’s extractive industry, yet Ephraim Nyondo, reporting for today’s edition of The Nation, reminds Malawians that investors need to be “cherished”.  Furthermore, Nyondo writes that transparency around mining agreements and government engagement in “meaningful and comprehensive consultations on the legal issues surrounding mining in the country” are imperative if Malawi is to benefit from foreign direct investment.

The dispute over the Malawi-Tanzania border has diverted many people’s attention away from whether or not Malawi is actually ready to allow the exploration and extraction of oil. The ongoing controversy over Malawi’s largest mining project, Kayelekera uranium mine, indicates that much work is still required to ensure stakeholders are working together in the sector so that natural resources benefit Malawians as well as the investors.