Mkango Resources, a company exploring for rare earth elements in Malawi, has joined Twitter and is encouraging its followers to contact them for further information and make suggestions. This marks a first in Malawi’s mining sector. No other mining company is currently on Twitter engaging with users, although Globe Metals & Mining, currently in the process of finalising a deal to start mining niobium in Malawi, tweets updates infrequently. Twitter provides the company with a platform to share information and respond to reports in a timely manner, if it chooses to do so.

Paladin, the operator of Malawi’s largest mining project (Kayelekera Uranium Mine), has faced difficulties in managing public relations since it signed a Mining Development Agreement with the Government of Malawi in 2006. Just over a week ago, the Malawi News ran a story titled “More dirt in Kayelekera deal” criticising the much debated and still not publically available mining deal, and this week it was reported that environmental monitoring has not complied with terms of the agreement.

It will be interesting to observe the reaction of users to Mkango Resources on Twitter as the company appears to have begun engaging with users in a way that Globe Metals & Mining has not: will the platform abet or hinder the company’s public relations? 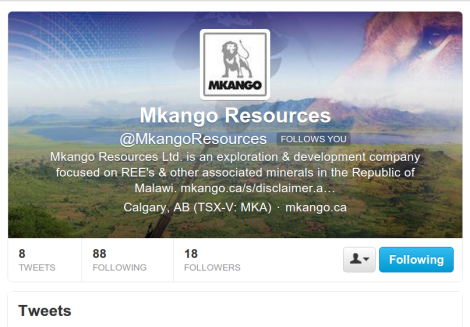 William Dawes, CEO of Mkango Resources, will pitch the Songwe Hill project and other activities (currently in pre-feasibility stage) to potential investors in Vancouver, Canada, on 25 April, at the Proactiveinvestors One2One Investor Forum.

Update 9 May 2013: SacOil, the South African company carrying out preliminary exploration work for oil in one block of Lake Malawi, is also on Twitter, but is yet to tweet. Follow the quiet company @SacOilHoldingsL.